I was not expecting to be able to get out on the water this early in the season, but I lucked out to day.  It was sunny, and the temp was in the mid sixties.  Water temperature was around 45F, but it felt warmer than that.  There was a bit more wind than I would have liked, but not nearly as much as we had yesterday.

Here’s the weather data from my house for today. 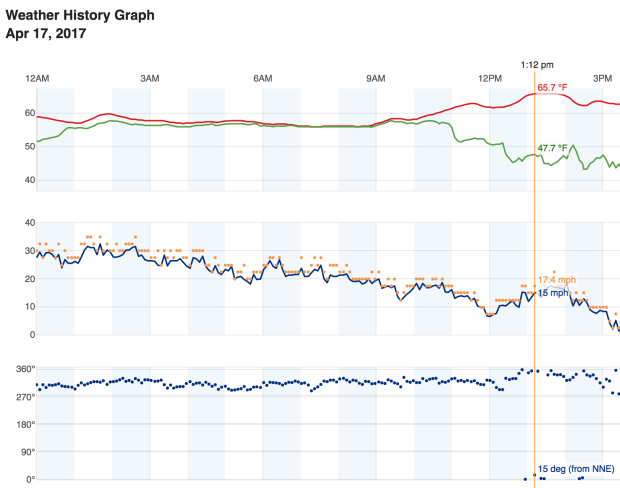 I launched right before 1pm, so the wind was building during my row.  This caused waves between 8″ and 12″.  This is big enough to present some steering challenges but not big enough to make it unpleasant.  There were a few scattered white caps.  Just to give you an idea of what it was like yesterday, here’s the weather data.  We had gusts up to 65mph over night on Saturday night and Sunday night. 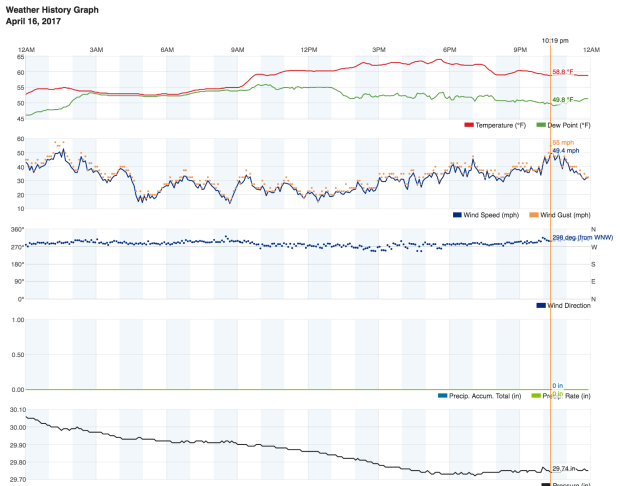 But thankfully, by the time Monday rolled around, it was much calmer.  I launched from the little beach a couple minutes away from my house, and rowed north up to wellfleet harbor.  This was splashy and slow into the wind and waves, but it was quite nice to be out on the water again.  On the expanse of the bay, my boat feels very small, especially when the waves build.   I finally made it to the breakwater of the onner harbor and turned.  Although the wind was from the north, it hooked around a bit and when I rowed to the east into the inner harbor, I was going with the wind and the waves.  This was some of the fastest splits I saw of the day.  I rowed up past the end of the town jetty and turned around into the wind and the tide to slog out of the harbor.  Once I passed the breakwater, I turned south and had the wind on my starboard stern quarter.  This was a tough angle to maintain.  The waves tried hard to push me to starboard and I had to maintain much heavier pressure on that side to stay straight.

Ultimately, I got the hang of getting my point and timing my strokes to surf the waves.  I would end up off course, but could swing back and repeat the cycle.  It was pretty fun and the time flew by on the way back to the island.  I rowed in front of my house back to the beach and landed there.

One bad thing, there must have been about a gallon of water in the boat.  I really have to get it fixed if I’m going to use it in the Blackburn. 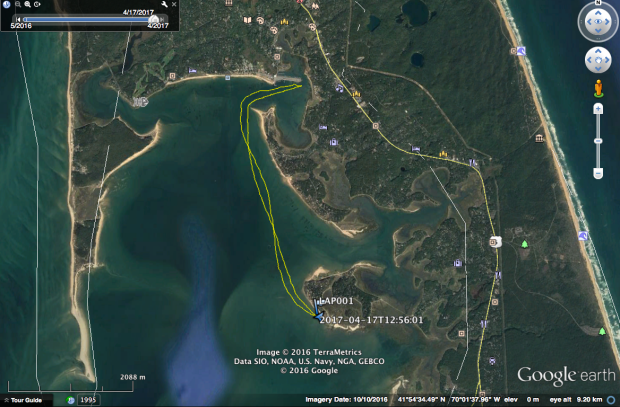 Sad but true.  I go slowly enough in my Alden star so that the pace doesn’t show up right in the plots.  You can see I was pushing hard enough so it was a good aerobic workout.  I was also trying to keep my rowing reasonably light by aiming at a stroke rate of 20.

Here’s a better view of the pace.  The first 2500 meters were into the wind and 8″ to 12″ waves.  The section from 2500 to 4000 was still into the wind, but I was approaching the north shore of the harbor and the waves were smaller.  I think I was also getting a bit more help from the incoming tide.  Around 4000m was where I turned into the harbor and I was rowing with the wind, tide and waves.  It was fast and fun. 5000 to 6200 was right into the teeth of the wind and against the tide.  Fortunately not much wave action.

Then from 6200m to the end I was rowing downwind with the waves on my stern quarter.  The pace variations were basically dependent upon the size of the waves and whether or not I was getting swamped.  That happened a lot.  You can see from the HR that I was holding a pretty consistent level of pressure. 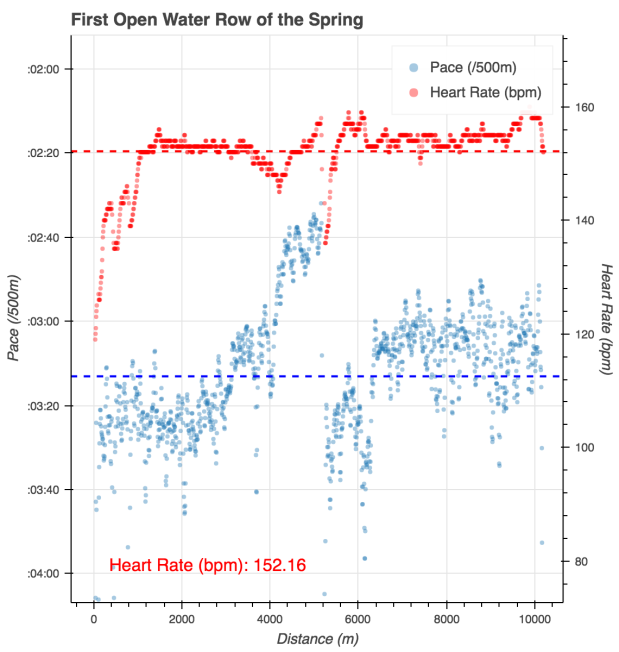 All in all an unexpected treat being able to get a row in this time of year.

2 thoughts on “Back to the Bay! First Open Water Row of the Season.”