A couple of weeks ago, I brought my Model D down to our house on the cape and left it there.  I had made up my mind that I wanted to have a rowing machine in both places, since we are spending more time there off season than I had imagined, and even in season, there are a fair number of days where the conditions are not amenable to rowing.

I decided to replace it with a Dynamic.  I have always been better on a static erg than I have been on slides, and I hope that if I can spend more time rowing on slides or on a dynamic machine, that I will be faster in the boat as well.  My plan is to move my slides from work down to the cape, so I can row on slides there.

The Dynamic is more expensive than a Model D ($1250 vs $900) and Concept2 seems to go out of their way to avoid selling it.  The other rowers can be ordered online.  To buy the Dynamic, you have to call the up and basically convince them to sell it to you.  I chatted with the sales rep for a while and he told me that they had a big problem with people who bought it because it had a smaller footprint than the model D, but then were dissatisfied when it was so different from what they had used at the gym.  He said that they only want to sell it to people who have tried out or are on the water rowers.

They shipped it quick.  It arrived within a couple days of me ordering it.  It comes in two large boxes.  Putting it together is non-trivial.  It took me the better part of an hour, and would have been easier if I had a second person for a few of the steps.

The mechanism of the dynamic is interesting, and complicated.  Start with the side view of the rower. 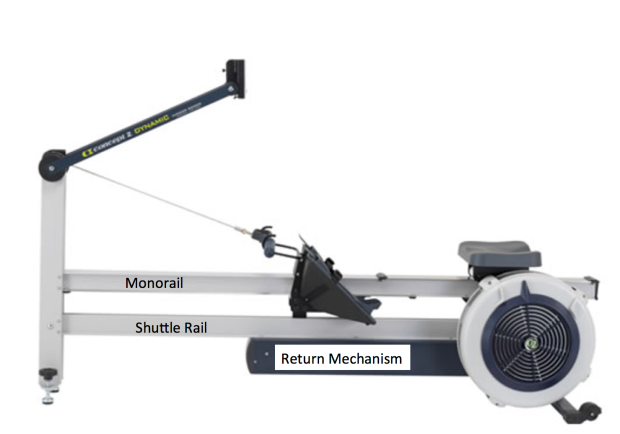 The seat runs on a short rail and is constrained by a short piece of shock cord.  The foot stretcher rolls on the same rail and can move quite far, from the vertical bar at the front of the rower all the way back to the position shown.  The footstretcher is weighted, basically to provide a similar mass as a single rowing shell.  There is a hook on the bottom of the footstretcher that extends into the shuttle rail below.  The shuttle rail is where the magic starts.  Here is a diagram that I put together from the online documentation about the dynamic

The drive chain runs through another pulley that is connected to the handle cord pulley.  The chain is terminated on one side and the other side goes around the flywheel drive gear and then down into the handle return mechanism.

Now things get byzantine.  The drive chain goes back and forth through two pulleys before terminating in a pulley assembly that is connected to the end of the handle return shock cord.  The shock cord runs around two fixed pulleys and is terminated on the side of the mechanism.  The whole point of all of this is to provide a consistent return force over the whole span of the recovery.  You need a lot of shock cord so that it is not pulling hard at full extension and not pulling at all at the catch.

The good part about all this is that the connection to the flywheel is just about exactly the same as on the static so it is remarkably consistent feeling to the static erg.

Like any design, it has pluses and minuses.  The pluses are a small footprint, dynamic operation, and a very solid feel.  It’s also nice to be higher off the floor, like on a Model E.  The biggest minus is noise.  The chain is going over a lot of different gears and traveling in metal channels.  All of that is a new source of noise in addition to the whooshing of the fanwheel.  It’s kind of a clattery, grindy kind of noise.  The kind of noise that you would get if you are running chains around gears through metal channels.  I assume I will get used to it, but I have to play the music a bit louder to hear over the noise.  I’m also trying to add a bit of oil to the chains to try to smooth it out a bit.

I find it quite easy to row on the dynamic.  On slides, I would have trouble with bouncing around a bit, but on the dynamic, I have no trouble.  One good thing about the dynamic is that the load at the catch is much faster and crisper than on the model D.  There isn’t that 6 inch section of the drive where you don’t have much resistance.

So far I have done an easy hour, and it was a bit more taxing than rowing on the model D.