I’ve noticed that I seem to do better off of slides for middle distance pieces.  For endurance sessions, at the same training power, I seem to have about the same HR and lactate.   And for sprints, I think I actually do a bit better on slides because I can rate up much higher.  But for the middle distances, I am having trouble finding a nice efficient stroke rate.  Basically, I have trouble getting into the groove.

So, today, I decided to do a bit of an experiment.  I replaced a planned 2 x 30′ threshold session with a 15 x 3′ / 1′ workout.  I’ve been doing this workout for a while.  It is one of the “L3” workouts from the Wolverine Plan.  And the pace for it comes around the pace for a 30 min TT.  I thought that this would be a good session to experiment with different rates on slides.

So, I decided that I would try to aim for a pace faster than 1:55, and start at 23 spm.  Then I would click up the stroke rate by 1 spm for each interval.  I decided to play it by ear in terms of how high I would push the rate, and then I could come back down the other side.

I did a couple of 3′ segments at a slower pace as a warmup and then went into the main set. At 23 SPM, I settled in at 1:53 and it didn’t sting too bad.  As I increased stroke rate, it was hard to avoid going faster.  I could tell that I was pushing the pace unsustainably fast as the rate increased.  The format of the workout gave me a chance to try to out some changes in stroke dynamics.

As I got to the higher rates, I needed to concentrate on having really fast hands on the recovery.  If I did that, then I could take the drive a bit slower and maintain the pace.  But it was really murder on my arms.  By the tenth rep, I found it hard to keep my arms out with good form while I paddled in the rests.

From today’s experiment, it looks like for a 30′ Threshold, on slides, I should be rating between 28 and 30.  But I rarely rate that high either in a boat or on an erg.  I need to practice at these rates more often to make it work.

And through this experiment, I think I am starting to get an idea about the root cause of why my boat speed is not as good as my static erg speed.  I have deeply ingrained muscle memory to pause at the finish.

It’s gotten a bit better over time, but I do not flow smoothly from the drive through the finish to the recovery.  Instead I pause, then from a stop, I accelerate through the recovery to the catch, and then hit the catch hard.  I am beginning to think that getting to the point where my middle distances are better on slides than on static might unlock some boat speed.

So, back to the workout.  I pushed all the way up to 33, and started back down.  I did the 32 spm segment which was my 12 interval, but I was toast after that.  I felt barely recovered at the end of the minute rest, and blew up a minute into the 31 spm rep.  I paddled that one out.  Then did two more reps at 31 and 30 spm and decided that I had done enough damage for today.  I did a quick 3 minute cool down and headed off to the showers.

And because it was that kind of a morning, I discovered that I had forgotten my towel at home and needed to dry off after my shower using paper towels. 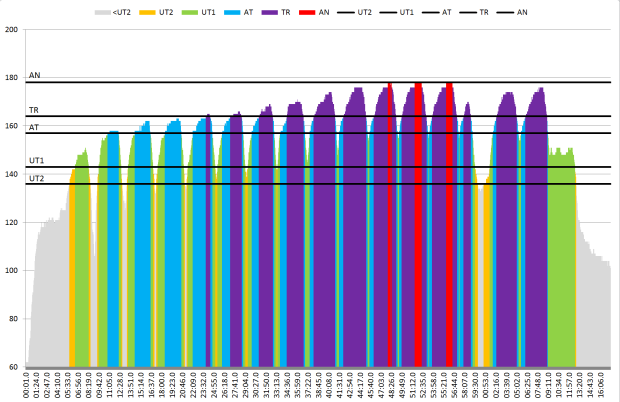 I think I’ll do a slow 30 minutes tonight to try to facilitate recovery and a 4 x 20′ tomorrow morning.