Prolific posting day for me.  I saw this on Twitter,  An academic paper about system over estimate of distance by GPS devices.

WHY GPS MAKES DISTANCES BIGGER THAN THEY ARE

There is a lot of heavy duty math in the paper and if I manage to understand it, it will take a while.  But the basic gist is that the larger the error in the estimated positions along the route trajectory, the more cumulative distance errors occurs. 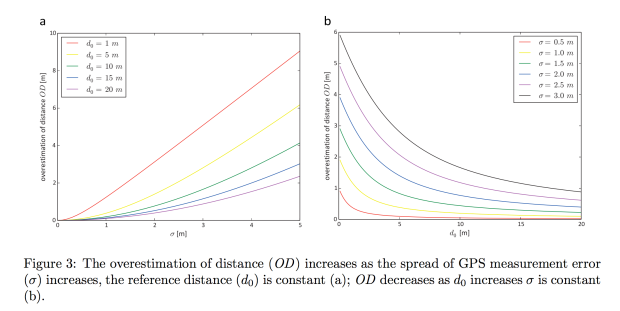 In the pedestrian example they provided, the error peaked at 2.5 meters of over estimation at 45 minutes into the experiment.

Not all that much error, but it gives you something to think about.

I came across this over on Reddit.  I guess Mahe had a GoPro mounted on his boat during the head of the Charles.  Basically the same perspective as mine, but mounted a lot further away from the stern so you can’t see the finishes, which I am sure would have been even more impressive.

His row was at the end of the day on Saturday, when the winds had died down a bit from earlier in the day, but was still a factor.  The video shows him passing Andrew Campbell between the Western Avenue Bridge and the Weeks Footbridge.  Campbell is a lightweight and was effected by the headwind a lot more than the gigantic Drysdale.

Part 1:  Including a bit of his warm up, the start and the race through the Anderson Bridge

Part 2: Through the big turn, under the Eliot Street Bridge and to the finish.

Oh, what I’d give to be able to row like that.  It is interesting to have a video of the same race, under similar conditions, from the same perspective but with one of the finest scullers in the world doing the rowing.  It was particularly humanizing to see him take a lousy stroke now and then.

Sorry about the shaky video.  I had to improvise a mount and it had a bit of wiggle to it. I decided that the videos would look better using the youtube stabilization.  I’m not entirely sure.  Also, for some reason, the heart rate sensor decided to not talk to my iphone yesterday.  It worked fine to the speedcoach, but that was using a polar receiver.  I suspect that the bluetooth connectivity is a bit squirrely.

Truth be told, it’s not all that exciting a video.  I go under a bridge at about 5 minutes into the first part.  And the water is nasty and rough, but since I had the first bow number for the event, I had no one to pass.  I had a close call with a buoy at 1:55 in the last part.  I almost got the last guy of the Master “C” group at the end of the race, but not quite.  I think the sprint from 2:00 into that video to the end was pretty good.

The pre-start and about the first 8 minutes or so of the race:

The middle of the race, from after the bridge around the big bend and into the flatter water.

The last few minutes of the race.

Not the prettiest rowing I have ever done, but for the state of the water, I’m OK with it.  Lots to work on for next season!