Yesterday, I did a hard 5k on Lake Quinsigamond.  I mounted a gpro camera on a backstay attached the end of to my starboard rigger, just forward of the oarlock.

Looking at the video, I am having trouble finding a lot to criticize.  The things that I notice are:

The other thing I am wondering is if it would be a good idea to lower my shoes a little bit, I might be able to get a little more reach.

Last thing that I noticed was how absolutely beautiful it was yesterday morning.  Isn’t it a pretty lake!

And here is the boat acceleration from RIM.

Comparing this to “world class” curves, the obvious difference is in the height of the positive acceleration peak.  There is also a bit of trash at the finish.  The catch seems to have a little double hump thing going on, which I have to assume is me bouncing a bit at the forestop.

Just to follow up on the discussion from Sander’s blog post.  I decided to look at the same set of strokes, but over a single stroke, 4 strokes, and 8 strokes to see how the curves and numbers change.

There is a remarkable change in the curve from 4 strokes to 8 strokes, and the numbers change too.  I think that if you are using RIM to provide feedback, that you might do best to either stick to single strokes, or at least make sure that you are always looking at the same number of strokes averaged.

r26 – This was after 2K of hard rowing, so I am feeling a bit more fatigued.

On this one, the primary flaw that I see is that my blades are getting shallower as the drive moves from catch to finish.  By the time I extract the blades, about the top 1/3 of the blade is above the surface of the water.  I need to work on keeping my hands level through the drive and finish a bit higher on my torso.   The other thing that could be causing this is allowing myself to lay back too much at the end of the stroke.  I would probably be faster if I finish a bit earlier with less layback.

Here are the RIM curves for r26 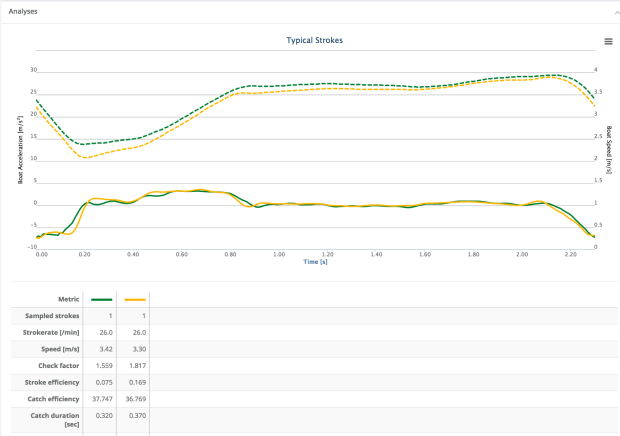 The negative acceleration at the catch is larger, which probably means that I am now rushing the slide a bit.  You can see a little positive acceleration on the last third of the recovery.  Some strokes show a pronounced double hump, some do not.  There is still a bit of noise at the finish.

This video is the last 4 minutes of r26 and then about 5 minutes at r28.  From 1:30 to about 2:00 into the video, I am going underneath the brand new bridge across our lake.  Isn’t it beautiful?  Now we have two broad arches, on for up lake traffic and one for down lake traffic.

Here is one r28 stroke and one r30 stroke.  Basically the same shape.  A bit less of the double hump on the r30 stroke.  One change this year is that I have a smaller positive acceleration during the recovery, which I think is basically a good thing since it means that my speed on the slide is more constant and I am not rushing into the catch.  But I am not expert enough to be sure. 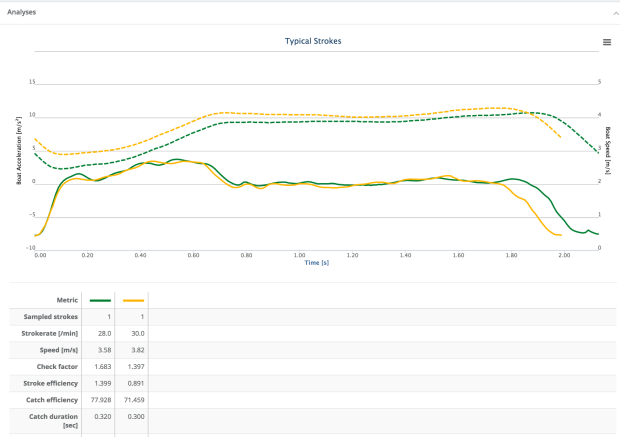 Later today, I will post some video of the drills that I did yesterday.  Someone may find them useful, or if nothing else, you can smirk about how bad they look.

I am very fortunate to have had Sander give me some feedback by marking up my video.  He was illustrating two flaws in my rowing.  The first is not having relaxed and straight arms at the catch.

The other flaw was not maintaining constant handle height through the drive.