So, I know that I was supposed to do a light day today, but looking at my work schedule, it didn’t look so good for a power test tomorrow.  I also felt pretty fresh.  I didn’t need to dig all that terribly deep for the 2 speed test.  Finally, thinking about the 2K test, the idea of keeping up the intensity seemed to more closely mimic the kind of taper I like to do.

The challenge was the PM on the erg.  I was doing this at work and it is a older model C with an old style PM.  The kind that you can’t hook up to rowpro.  So, I pulled my PM3 off of my erg at home with the idea of swapping it onto the erg at work for the day.  I was stymied by the fact that the mounting bracket has been changed between PM models and the new one would not fit on the old bracket.  Bummer.

So, I ended up setting my iphone on a upturned trashcan, leaning against a small dumbell and aiming at the PM.  Then I laboriously transcribed the power reading from each stroke into excel.  If you want to watch some really boring videos, I posted them to youtube.

Why are there two, you ask?  Well, there’s a story behind that.  Not much of a story, but a story nonetheless.

I did a nice gentle 20 minute warmup, and then got myself psyched up for the test.  Apparently I did not get myself psyched up nearly enough, because I blew up big time 32 seconds into the test.  I took the go all out advice to heart and I just totally lost it round the 30 second mark.  I was on slides, so I was cranking at close to 50 SPM.  I was rowing mostly with my eyes closed, and then opened them after about 25 strokes.  When I saw I had only made it halfway, I suffered a bout of acute despondency and dropped the handle.  Pity, it would have been a good test if I had the guts to keep going.  As it was, I set a new PR for peak power.  770W vs my old mark of 701W.  I also maintained with 10% of that value for 25 seconds, which shows that my “Anaerobic alactic critical duration” is reasonable.  “Rowing Faster” says you want to be able to hold that for longer than 20 seconds.  Of course for the other measures, average power and “Anaerobic lactic critical duration” were not measurable from this failed test.

I took a few minutes to get my head together and tried again.  This time, I made it less than 20 seconds into the test and I didn’t bother to transcribe the results.

I had a chat with myself, and decided to make yet another attempt, even though I knew that the test results would not be fully valid.  At least I would be able to get a completed test to score.  Maybe I’ll loop back to this in a week or so.

The important thing is that it gives me something to compare against in future tests.  I will feel better if I redo the test in a week and get a complete first shot test done.

Here are my curves

Here’s the HR plot for the whole disaster. 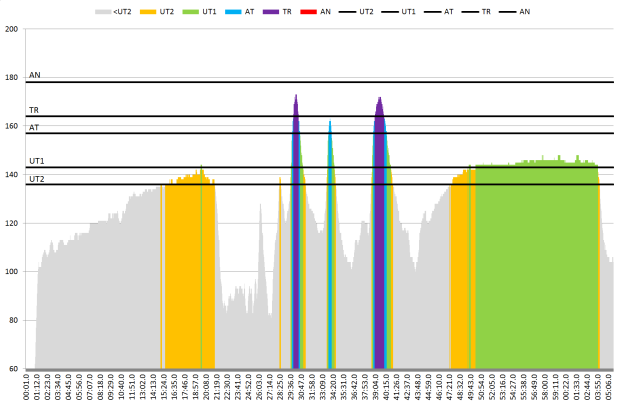 Tomorrow:  40 minute steady state sometime during the day.  Then 2K trial on Friday.