Down in Wellfleet.  I saw that the weather forecast looked good.  Sunny, calm, but a bit chilly (in the mid 40s).  I decided to go for a last Open Water row of the season.

The wind forecast proved to be wrong.  Right before I launched, it felt like the wind was freshening and it definitely was kicking up some waves.  Here’s the weather data from the station on my house. 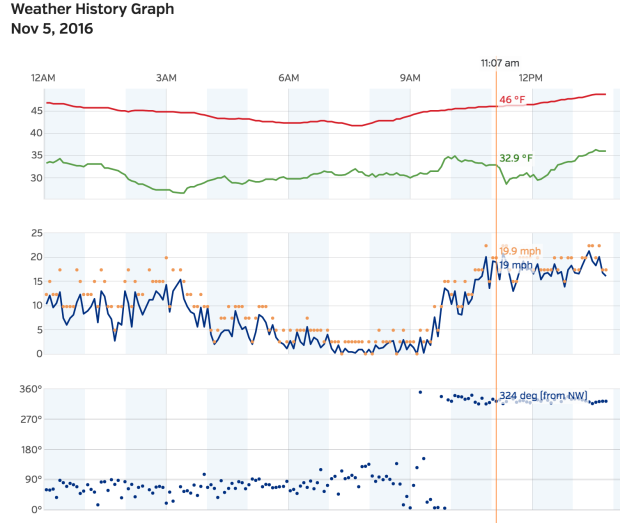 I launched at 11:07, according to RIM, and on top of my house it was blowing nearly 20mph then.  It didn’t feel like it was blowing quite as hard as that.  I think the fact that my wind sensor is about 80 feet above sea level means that it is catching a bit more wind than I was seeing on the water.  It was still pretty breezy though.

I didn’t check before I set out, but the water temperature was 55F.  When the air temp is in the 40s, this actually doesn’t feel too bad.  And for those safety sticklers, I passed the “100 degree rule” by a degree.  46F (air) + 55F (water) = 101!  But I think this will be it for open water rowing this year.  The margin for error is pretty slim at these temperatures.

Since it was cold out, I brought a towel and socks.  After I launched from the beach, I dried my feet and put on the nice dry socks.  That lasted about 2 minutes before the waves came crashing into the cockpit and soaked my feet.  The waves kept building and I decided to head pretty much straight up wind to get across the harbor over to the long sand spit on the far side, where I figure the water would be a lot flatter.

Rowing into the waves was slow, but not hard.  There is a regular pattern to the waves and you can get used to rowing in time time with them.  The key thing is to be very deliberate about placing the blades at the catch, and then load up the drive gradually, since there is a good chance that one blade or the other will miss water due to the waves.  If you have a habit of rowing in, this would sure help cure it.

I made it about 1500m before a wave managed to fool my phone into thinking that I was doing a whole lot of screen touching.  Over about 500m of rowing, the splashing did the following:

As I approached the spit, the chop subsided.  I was still a couple hundred meters off shore, but when I looked over my shoulder, I saw a couple of big rocks poking up maybe 50 meters ahead.  I decided it was probably a good time to turn north and row along the lee shore of the spit.  I stopped briefly and stopped the music, fired up Wahoo fitness.  I decided to do that because I know that it works in background with the screen off.  So once it was started, I turned off the screen and just rowed by feel.  It was pretty enjoyable rowing unplugged like that.  Even in the lee of the spit, there was still a bit of chop and it really was trying to push my bow around when I was rowing north.  I needed to maintain a lot more pressure on my starboard oar the way along.

You can see a couple of sharpish turns as I approached the north end of the bay.  The first was when I saw the bottom rapidly shoaling on me as I approach the sand bar at the north end of the spit. I turned to the northeast to get back to deeper water.  Then you can see the unintentional turn towards the northwest which was induced by the wind and chop.  I finally noticed what was going on and turned east toward Wellfleet inner harbor.

As I rowed along, I again noticed the water shoaling under me.  You can see the area on the map, a little sandbar right after my turn to the east.  It got shallow enough that I touched bottom with one of my oars.  After that, I paddled along and the waves got a bigger as I got further from the spit.  I was rowing with the waves and it was kind of fun when I could time my stroke to catch a wave to surf down the front of (more on that later).

I continued past the wellfleet breakwater into the inner harbor and rowed all the way to the end of the town pier, when I spun.  Rowing with the wind, I was starting to feel a bit warm with all my layers and with a lack of splashing and spray.  That changed as soon as I turned back toward the west and started rowing into the wind.  The boat took a lot more effort to move, and the wind felt pretty strong and cold.  I wasn’t feeling overly warm anymore.  At that point I really appreciated the fantastic JL shell that I was wearing.

Once I cleared the end of the breakwater, I needed to turn south to head home.  This proved to be a significant challenge.  Going south meant that I had the northwest wind and waves coming at a angle to my stern.  Along this section the waves built to over 12″.  Now, I know that this does not sound all that impressive, but when the freeboard of the boat is less than 4″ and the oarlocks are about 8 inches above the water, it means that there is lot of water above the top of the boat, and maintaining control of the oars requires a bit of concentrated effort.  Also, since the waves are at an angle, you need to have vastly different handle heights at the catch to make sure that your blades are actually in the water.

The result of this was that I actually worked less hard in the section and rowed pretty slowly.  I continued south past my house to the beach where I launched and then turned for a last run straight downwind to the beach.  This was a blast!  The waves were over a foot, and now they were right on my stern.  I could get myself lined up and surf down the faces of the waves.  Over 5 feet of stern was completely submerged, and when I surged over the crest of a wave, my backstays would be slashing through the water sending spray all over.  The cockpit would fill with water.  The fun bit was trying to keep my stern to the waves, because they were trying to turn me broadside at the end of each of these surfs.  This kind of rowing bears no resemblance at all to flat water rowing.  This was all about timing your stroke to get you on the face of the wave and control the boat well enough that you can put in a single powerful stroke at the right time.  Honestly, the last 3 minutes of this section made the difficulties of the prior 30 minutes totally worthwhile. 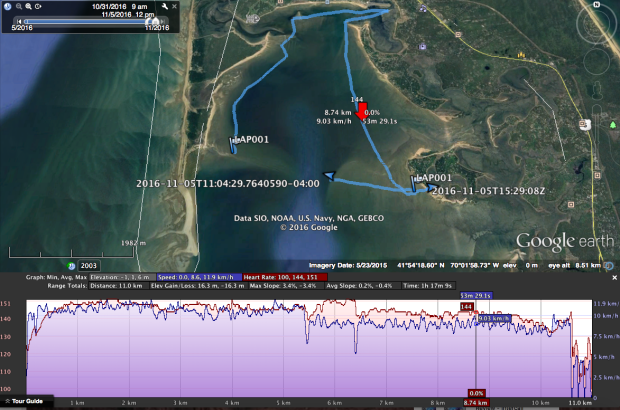 One fun thing to point out on the map.  See the three little intervals at the very end.  That’s me carrying my oars to the car, then going back to the beach, then carrying my boat to the car over the dune.  I didn’t stop the wahoo app until I was in the car and had the phone out of it’s waterproof case.

Also notice the 2000m gap at the beginning.  The first path to the west is the TCX file from RIM.  It stops when the ocean started screwing around with my phone.  The line starts again after I got the wahoo fitness app running, and started to row north along the spit.

This is the RIM data for the row across to the spit.  I estimate another 2000m basically just like that is missing. 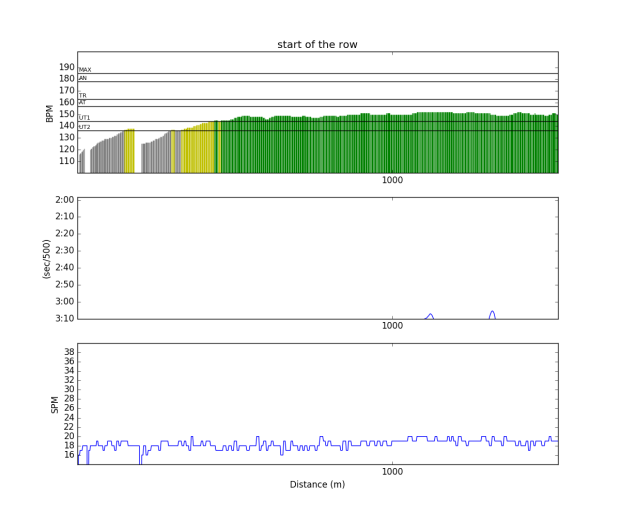 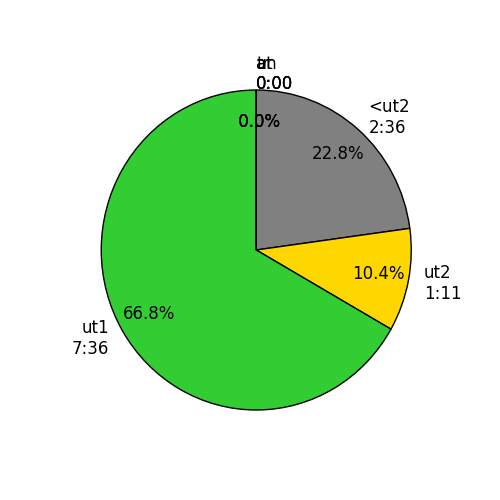 From 9000m to about 10,400m was the worst wave action and I was struggling to get good strokes in.  You can see how my heart rate is dropping in this section.  I was really just trying to keep the boat on course and pick my way through the waves.  Then finally after 10,400, that was where I turned downwind and surfed to the beach.  Still not fast, but a hell of a lot of fun! 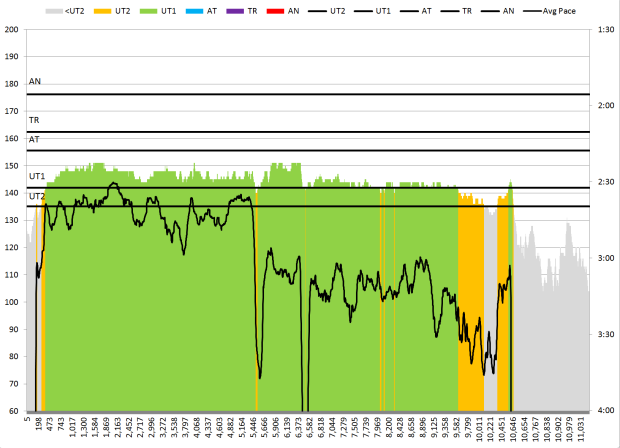 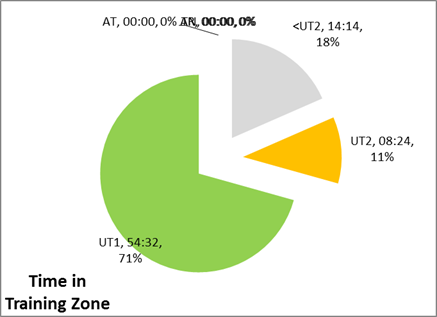 So, when you put it all together, you get