The weather reports were ominous.  Rain and wind starting around 11am.  What time was our race…11:07am.  Before that, the water was flat, the winds were calm and the skies were cloudy but not dark.  As the morning wore on, the weather reports seemed to be improving and even when we launched around 10:20, it was still quite nice.

We headed down to the warmup area in the basin and started going around the “box”.  This is a big area marked by 6 huge yellow and black checkered buoys.  We did a couple laps and still had some time so we embarked on a third trip around.  By now it was about 10:50.  We turned the corner and started to row up to area where we were being lined up.  Even numbers on the cambridge side, odd numbers on the Boston side.  We looked up river and what did we see?  A wall of rain charging toward us.  I am serious.  You could actually see the line between where it was raining and not raining coming across the water as it approached.  And then we were in it.  The rain was not all that hard, but the wind picked up from the NW and it was pretty significant.  It was blowing steadily between 10 and 15 mph with gusts up to about 20mph.

We sat in the rain and wind, trying to hold our position between bow # 43 and #47.  Precisely at 11:07, they started the first boat and the odd and even line began to slowly paddle up.  Before I knew what was happening, I saw the red and green flags in the chute that are a couple of strokes away from the start and then I heard the announcer struggling to pronounce Lake Quinsigamond Community Rowing and say we were on the course.

Here are links for the stern video of the race:

The video tells the story.  We hacked our way through the head wind to the BU bridge.  Steering through this bridge is a challenge under ideal conditions.  With a nasty head wind blowing rain in your eyes and with multiple boats ahead of you, it is even tougher.  Joe picked a great line and we zipped right through.

Then we were into the Magazine Beach turn.  Here we were exposed to the head wind across a wider part of the river.  The goal is to get tight to the green buoys along the cambridge shore and try to get into a good rhythm through the turn.  This was complicated for us by a slower boat in front of us and a faster boats right behind us.  Joe did his best to avoid the boat that was passing us to the inside, while not running into the boat ahead of us.  On the video, it looks like they kind of zigged and zagged a bit across us as they tried to figure out how to get out of our way.

The boat that passed us looked like it was going a thousand miles an hour and that kind of got under my skin.  I started to have irrational fears of ending up in last place.  This was certainly spurred me to dig deep, both figuratively and literally.  Figuratively, I pushed up the stroke pressure and rate to an unsustainable level.  Literally, I started to row pretty badly, burying my blades too deeply and not being careful with my finishes.  This did not do our boat speed any favors.

We got into the power house stretch and the water was smooth and the wind was blocked.  It felt like the boat was moving better here.  I hardly noticed, but we passed another boat at the beginning of the stretch.  I think it was because I was too focused on a couple of boats that were gaining on us fast and passing us after we emerged from the Western Avenue bridge.

We took twenty strokes and then turned for the Weeks Foot Bridge.  My wife, sone and some friends were there cheering us on.  Honestly, because of the boats that passed us, I was pretty despondent at that point.  I had pushed way too hard, and I wasn’t even sure if I’d make it to the end.  Strangely enough, once we had passed them, I started to feel a little bit better.  I eased up a bit on the rate and we made the turn to the Anderson Bridge.  Coming out of Anderson, another boat passed us, but I my attitude had improved.  I had decided to just do what I could and just not give up.  The long turn toward the Eliot bridge was uneventful, mainly because Joe steered it really well, including the really sharp end to the turn and the passage past the docks just upstream of the bridge.  Here’s a comparison of my course last year, and Joe’s this year.  (2015 is red, 2016 is yellow)

Here’s the first third. You can see the steering around overtaking and slower boats on the yellow line.  I like the line that I took last year closer to Cambridge as we approached the first bridge, but I doubt it makes much difference.

Here’s the powerhouse stretch, into the weeks turn.  Joe did a better job of this than I did last year.  He was a lot smoother through the weeks turn and got us in just right place for the turn under the Anderson bridge.

Here’s the last third.  It looks like I did better job at the beginning of the curve, and Joe did better second half and he hugged Boston side into the bridge.  I hugged to cambridge shore last year, Joe swung a little wider, but again I don’t think it added much distance. 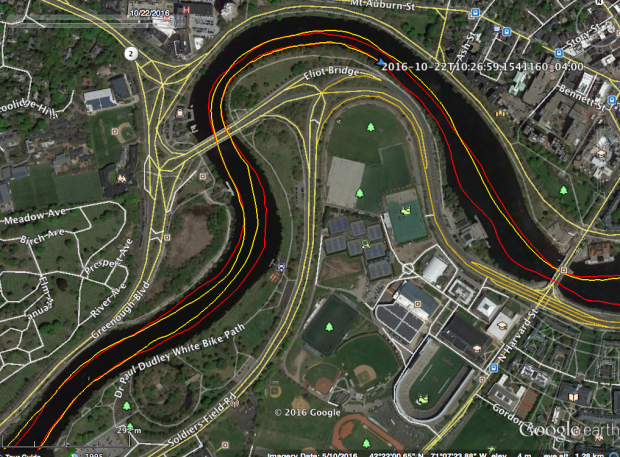 In terms of effort, this was a tough race.

I was into the threshold HR zone within a minute of the start, and I just kept pushing.  I kind of plateaued around 175/176 or most of the race, and then with about 5 minutes left, around the Anderson bridge, I started to up the rate and pushed my HR up above 95% of my HRR.  I usually count out strokes at the end of a race to give me something to focus on.  I had planned to start counting at the Anderson Bridge.  This is about 1k from the end so, about 120 strokes.  But I forgot about it with the steering that was going on.  I remembered as we went into the long turn, and I figured that we must have gone at least 60 strokes by then.  So I started counting and I figured I’d need to count up to about 60.  I was wrong.  I got to 50 and there was no sign of the finish line.  I counted another 10, still no finish line.  I wasn’t sure if I had another ten strokes in me, but I did and that set brought us just across the line.  Luckily there was a big gap between us and the next boat to finish because I needed a few seconds to put myself back together.

With the headwind, and extra river flow, it was a slow race.  The winner was a full minute off the course record for this age group event.  And the winner was the crew that set the record!  We were a good four minutes slower than the winner.  We finished in 43rd out of 52 boats.  So, my fears were not realized.

When you talk to some of the folks that we compete with, you realize that there is some genuine athletic talent in the event.  Guys that were former national team members and varsity level college rowers are common.  This seems different from running and biking where there are a lot of more casual competitors.  We were talking to one guy in our race who set the world age group record for the marathon on the erg 20 years ago.  He held a 1:47 split for whole thing!

In any case, unless you are talented and dedicated enough to win a big event like this, all you can do is try to improve.  Now I have an initial marker that I can try to make better over time.  Looking at the results, there are improvements in many areas that could help.