Weather:  Bright sunshine, temperature started in the low sixties, but warmed up.  A Southernly breeze kicked up right when we were starting our race.  This was mostly a cross headwind.

I was rowing stroke, Joe was in the bow.  This is a 5km head race that shares about half of it’s course with the Head of the Charles.  It starts upriver from the Weeks Bridge, and finishes at the CRI boathouse.

The race starts at the right and proceeds to the left.  The race plan was broken into 4 parts.

1.  Anderson to Eliot: 1.2km
– Straight shot from  the bridge to the turn for about 600m, then a broad sweeping turn for another 600m
– The hard part is that the turn gets much tighter right at the end so you have to be ready to lean hard on starboard to make the middle arch.
– The race plan is to hit the first 500 pretty hard at about a r28, and then focus on trying to row clean at r26 through the turn.
2.  Eliot to Arsenal: 1.8km
– This is the guts of the race.  It’s pretty straight and there not much you need to do but stay reasonably close to the Cambridge side.
– In this section, we should stick around a r26 and work on keeping it together.
– It is probably a good idea to call some 10s in this section to focus on whatever parts of the stroke are getting wobbly.
3.  Arsenal to N Beacon: 1.2km
-Digging deep at this point.
– I am hoping that we will have managed our pace well enough over the prior section that I can lift the rate to 28 in this section.
4.  N. Beacon to the Finish: 400m (more or less depending on where they set the line.
– I plan to crank the rate up to 30 or higher while we are under  the bridge.
– Coming out of the bridge, with the rate still at 30, you need to call for tons of port pressure to hold  the line.
It didn’t play exactly to plan, but it was pretty close.  We were slower than either of us were hoping we would be.  And we finished last in our event. 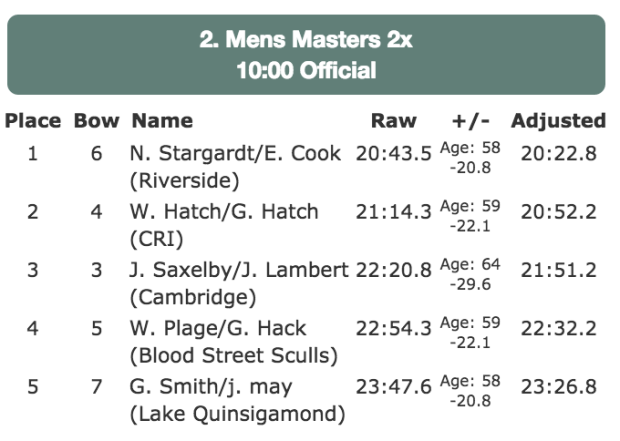 So, we finished 53 seconds behind the guys who finished fourth.  So, over a 5k course, that means that we need to improve our average pace by just over 5 seconds.  We did this race at a 2:23 pace.  Here are the splits
Reviewing it, it is worthwhile to break it down into parts to try to improve.

1.  Rate:  The overall rate average for the race was a 27.5.  This is higher than it should have been, and that’s entirely on me.  I was over excited and I didn’t do a good job holding 26 through the guts of the course.  The higher rate made it tougher for Joe to stay in sync, especially with all the steering he had to do.  This is just a matter of having better discipline.

2.  Steering:  I am frankly quite impressed with the line that Joe steered.  He has never rowed this river before, and in comparison with the two boats behind us, it was clear that he was steering better and putting distance between us and them at a couple crucial spots in the race.  There were a few spots in the race where we needed to turn sharply enough to hammer our boat speed.  The first of these was right out of the Anderson Bridge, where the river turns toward Cambridge and the buoy line snuck up on us.  The second was the turn into the long straight section by Soldier field.  The river bends toward Cambridge and we swung out into the buoy line.  The final time was coming out of the N. Beacon Street Bridge, right before the finish line.  The turn is quite sharp and we needed really hammer the port strokes to stay on the course.  As I watched some races after ours, it seems like that last turn is a tough on, no matter how perfect your line is.

I think it will be critical for us to get some runs on the HOCR course so that Joe has a chance to learn the land marks and rehearse the turns.

3.  Technique:  Here’s the area where we can do  the most to improve.  All of our practice together has been on Quinsigamond and so, we have just gotten to the point where we can get synchronized and clean on the gloriously long straight sections of the lake.  On a twisty turny river, where we are always pulling harder on Port or Starboard, and Joe has to have his head on a swivel to find the line, we were no where near clean.  I know that my finishes were sloppy, and I was typically dragging at least one blade on recovery.  Joe said essentially the same thing, that trying to steer and maintain the rate really made it hard for him to “get in a groove”.  So what do we do?  A couple of things.  First, I keep the rate at 26, don’t get all fancy with higher rate for now.  Focus on getting good at that rate.  Second, practice full pressure turns.  I took a look at the Eliot turn, and superimposed it on a same scale map of Quinsigamond.   If we turn at full pressure around the big island, and then loop around the small island to the east to go back up lake, we get something that is very much like 2 or 3 Eliot turns.  I think a couple of reps of that during each workout will give us enough time turning under pressure that we can hold our technique better.

4.  Fitness:  Joe is still rehabbing from a surgical repair for a torn biceps tendon, and I haven’t had as much time or focus as I did last year.  So, I think we have to be realistic.  We have 34 days from now to the HOCR.  Maintaining as full of a training plan as possible will be helpful, but is unlikely to yield massive improvements.  I’m going to stick with my predefined plan.

5.  Effort:  As near as I can tell, we both put everything we had into the race.  Here’s the Pace and Rate plots, with my HR.  So, the last 5 minutes of the race was anaerobic.  I felt spent at the end, but pretty much OK.  But at the dock, I experienced something new.  I had a massive coughing jag, and nearly threw up.  It didn’t feel exactly like an erg cough, but it was a bit disconcerting.  But, I certainly felt like I put everything I had into the race.

The race was a massively useful learning experience.  The good news is that there is a lot of stuff to work on that will make us significantly faster.  The bad news is that we have a lot of ground to make up.

Later today, I will do a normal endurance session.  Tomorrow morning, back to the lake for a session with Joe.