No rowing on Saturday.  My wife and I were down in New York City.  We had Friday night tickets to the “hot new musical” Hamilton.  It was a remarkable show.  Difficult to believe that you can create a heart wrenching play about the guy who was the first Treasury Secretary of the United States.  Even more remarkable, the show was hip hop based and nearly the entire thing was rapped or sung.  In my mind, it has basically just reinvented the genre of musical theater.

We got home in the early evening on Saturday.  Too late for a row.

The weather data says it was only a blowing 7-10mph, with gusts up to 15mph, but it felt like a lot more wind while we rowed in it.  It was straight from the north which is a head wind while rowing up lake.

I was in a quad with Bob, Angela and Deb.   This time of year, there is a fully buoyed, six lane, 2K course set up on the lake from the 290 bridge down to the rt 9 bridge.  There were races later on in the day, but we could row up the lanes this early in the morning.

We headed up lake first and turned around before the rt 290 bridge because the stake boats were out and then turned and rowed with the tail wind (and big chop) all the way down the lake.  Then we turned around for the long slog back up to the boathouse.

I forgot my HR strap at home so no HR data.  I also got the screen splashed pretty hard during the last push to the bridge, so the last 1000m or so is missing from the pace plot.  The TCX data kept recording though. 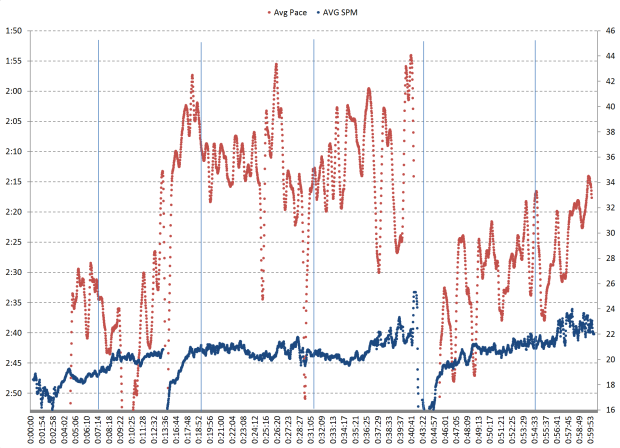 Tomorrow:  Probably another 3×20.  I fly out to Denver late in the day tomorrow and return on Tuesday night.