I am trying to get a handle on periodizing my training.  The book The Science of Winning by Jan Olbrecht makes a big point that an athlete will plateau after 8 to 10 weeks of consistent training and the training durations and intensities must be modulated to maintain progress.  This lecture takes a different view.  That periodization is highly variable from athlete to athlete and must be evaluated with a view toward individual progress.  Changes have to be made if the desired training effect is not seen.

He describes an experiment conducted with well trained cyclists.  The 69 cyclists were divided up into 3 groups.  Each group followed an 80/20 polarized training plan, but the higher intensity training was varied between the groups.  Here is the plot showing the average training hours per athlete per week in the study.

All three groups had 4 week mesocycles with varying workloads and you can see the difference in how well rested the athletes felt in those week.

Each of these three groups were given different a training plan.

Pretty neat experiment, huh?  In the traditional group, the intensity build in each mesocycle. 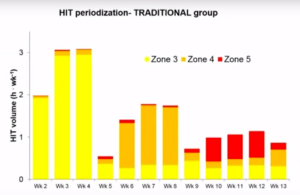 In the hybrid group, each mesocycle had a mix of each type of training.  This is very much like the Pete Plan or Wolverine plan.

In the Reverse group, it all started with hell week with 3 high intensity sessions, then moved to intermediate and longer intervals.

The results were interesting.  In the traditional group 60% of the athletes made significant gains in VO2max power.  The other groups significantly lower part of the group made big gains. 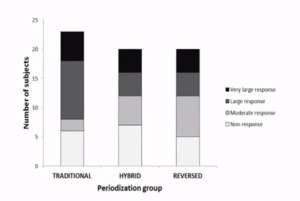 The main point that Seiler made though, was that significant portions of each group did not make progress with the plan that they were on. 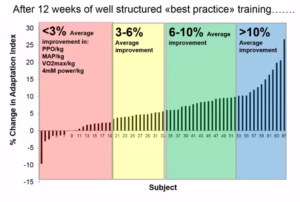 For me, the big take away is that the lowest level of success was with the hybrid plan and that is basically what I have been using for the past 4 years with very little variation.  I think I will start to plan out training loads and intensities following the “Traditional model” for my winter training plan and track progress.  Of course all of this is in the context that 80% of the training will be low intensity steady state, but the type and amount of high intensity work will change by mesocycle.  The other take away is to monitor progress and make changes when things are not progressing as I expect.

11 thoughts on “From Polarized to Optimized. New Lecture from Prof. Steven Seiler”