Another glorious morning to be on the water.  Sunny, upper 60s, basically no wind.  Three boats from Brandeis plus a launch were out, but they were finishing as I was getting going.

Per the training plan…

When I read that last night, I decided that it meant that I should row

Of course, what happened on the water was completely different.  I did my first 5 bursts and felt pretty good.  I started paddling my 8 minute rest, and decided to do a couple more 20s.  I did 2 more, and then I had a moment of complete confusion.  I decided that I must have misread the training plan, and the “correct” workout was actually this:

This was a murderous change.  First, I didn’t have enough river to do all 15 bursts in each direction, so I ended up shaving off a couple of 20s at the end of each set.  Second,  That’s a lot of fast rowing!  It nearly killed me!

After I finally got to work and did some work, and got a spare moment, I went back to look at the post on Sander’s blog to figure out whether my initial or subsequent interpretation was correct.

The workout is an adaptation of a session that Sander posted here.

Here is the original form of the workout:

This is another one from my personal list of interesting workouts that I collected over the years. It says:

So three sets of 5 times 30 seconds of hard work, with mini rests that get longer for the higher stroke rates. Eight minutes rest between the sets. This is the first time I am doing it this season and I am not sure whether the stroke rates weren’t originally intended for the double or even the quad, so I lowered the target spm by 2.

I changed it from being time based to be stroke based, just because it’s easier for me to count strokes than watch the clock, but it’s pretty clear that it seems to indicate that you do 3 sets of 5, with 8 minutes between sets.  To dispell any doubts, he also posted a chart of his results for the workout:

Yep, 3 sets of 5.  What a painful error.  Anyway, it’s over now, and I’ll never make that mistake again.

So, given what an over reach the workout was, here’s how it went. 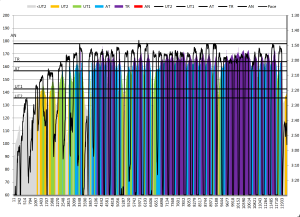 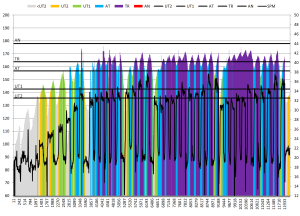 So, I setup the speedcoach to record stroke data.  So it logged pace, rate and distance on every stroke, versus every 20m like I usually do.  Looking at the speedcoach data, I started cheating the stroke counts.  A lot of the 20s were actually 19s or in some cases even 18s.  Since I didn’t take many strokes during the rests, they don’t really show up, but you can see where the rate decreases in the SPM chart.  I basically had enough river to squeeze in 2 reps at r36 before I ran out of river.

The other thing is that I ran out of speedcoach memory right after I finished the main set.  The memory holds 1500 strokes, and I finished my last interval with stroke number 1449, so my 1km cool down was not stored.  No great loss.

Here is a summary by rate of the intervals.

So, I guess I can’t be too unhappy with 5km rowed a sub-2:00 pace.  But it’s amazing how fast you lose your touch to row at higher rates.  I was very sloppy, and the acceleration curves looked just horrendous, even though I wasn’t even able to get up to the target rates except in the very middle of most of the reps.

The featured image is a picture I took this morning of a Blue Heron standing on a floating log in the lagoon where I launch.  Behind it is the Newton Marriott hotel, and in the foreground, some of the canoes that you can rent where I launch.  The weeds are thicker in this direction, but the whole lagoon is pretty weed choked at this point of the year.  I gets a bit better as the water cools down.

3 thoughts on “Let this be a lesson for me: Read the plan carefully —> A whole lot of 20 stroke sprints”