I have no pretensions about being competitive in the Open, but I’m thinking that any racing is good racing and as long as I don’t bring an inflated self image, I will be fine with the outcome.

The format is single heat races.  So, you try to win your flight an event.  There are no heats and finals or anything like that.

So, ready or not, here I come.

Today, the weather was really lovely.  Sunny and warm (about 65F). There was a pretty steady 7mph breeze from the West, which was a cross/tail wind going down river and cross/head wind going up river.  It was enough wind to make the boat feel different, but not enough to be disruptive in any way.

The plan for today was to practice starts and do some technical rowing with HR in the aerobic zone between sets.  I decided to take generally take the starts out to 20 strokes so that I could go through the start sequence, lengthen, and then settle down to something like a 1K pace.  If I had technical issues, I sometimes pulled the plug right away, or after 10 strokes.  I was getting tired at the end, so the last set of starts, I did all of them as 10 strokes.

I felt very shaky in the first couple of sets, but gradually got more comfortable.  I will definitely need to pull a few 10 stroke starts as part of my warmup for the race.  It seems that previous practices “wear off” quickly.

I managed to really blow the third start in the first set.  It was my classic problem.  I did not get my oar fully squared at the catch on the second stroke and it dove deep.  I did a 10 stroke start after that and focused on being really controlled on the recovery.  After the first set of starts, I rowed with slow roll ups the rest of the way down the river. 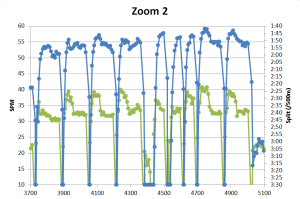 I turned around and did 4 – 20 stroke starts back across the basin into the headwind. In this set, the only problem I had was actually on the first pull of the first start.  I though I was really balanced, but as I squeezed out the first stroke, I tipped pretty badly.  I have no idea why.  So, I held water and tried again.  The following 4 starts were very comfortable and reasonably fast into the wind. The fourth one brought me close to the bridge, so I paddled through and lined up on the straight section in front of the watch factory.  I was feeling a little winded at this point, so I did 3 – 10 stroke starts.  It was actually 4 attempts, but I pulled out of the second one on the first stroke.   After the 3 short starts, I did 2 – 20 strokes starts to finish off the rest of that straight section. 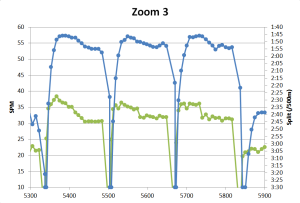 I paddled with square blades through the s-turn to set up for a few more.  With the wind coming from the West, coming out of the s-turn is generally the crappiest water, which on an absolute scale still is pretty good water, but at least it provided a bit of chop for me to practice on.  So I did 3 more 20 stroke starts.  I was pretty happy with these.  Good acceleration, no miscues, and a good settle to racing speed in each.  After the starts, I rowed the rest of the way to the up river start with square blades. 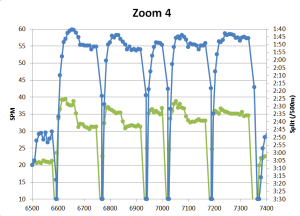 After I turned down river, I did my best start of the day.  My first 3 strokes were clean and was able to ramp up to 40spm with reasonable control.  At 10 strokes, I downshifted cleanly to 32 SPM and the pace drifted up as it should have.  From a standing start, I covered 150m with a avg pace faster than 1:50. Basically all of these starts felt pretty good.

The rest of the way down the river I tried to focus on rowing without touching water.  I was OK with letting the rate drift up, I just wanted to really focus on perfect finishes so that I could swing through the recovery with no wiggles.  I was having a very good time.

This took me all the way back to the dam, so I turned to do my last set of starts.  I was pretty worn out by this point, so I decided to give myself a break and do all of them as 10 strokes.  Again, I was going back into the head wind, but this set had no horrible misfires.

This only took me halfway back to the bridge, so from there all the way back to the dock, I alternated 500m on the square with 500m of steady state trying to row very clean.  By transitioning from on the square to feathering, I was able to focus on trying to keep my tap down and feathering as two distinct motions.  When I got it right, I heard a distinctly different, quieter sound at the finish.  More of a “pock” and less “gurgle”.

All in all a very nice morning.

Tomorrow:  I think I need to do a full intensity 1K.  I will probably also do a few 2Ks.