Another really beautiful, sunny, late summer day.  On Sunday the breeze was blowing from the East, which meant generally flat water, as long as I hung out close to the eastern shore.

As usual, I picked the windiest time of day to go rowing.  I swear that Zeus watches for me to walk out of my house in my rowing shorts, and turns up the wind dial.  The highest gust of the day was at 12:19.  I launched at 12:12.

So, I was slow going into the wind, and fast going away from the wind, but because of the direction, I was rarely dealing with much chop.  There was a fair amount of power boat traffic and that was definitely a factor up near the inner harbor.

As soon as I launched, I headed up into the wind and then turned at a floating oyster shack to head up into Loagy Bay.  I rowed up to the bridge and did a quick turn around.  I rowed back north until I was almost to the beach on Indian Neck.  I turned and skirted the shore.  This turned out to be a bit stressful because there were a bunch of boats moored along the beach, some swamped and barely visible above the water.

As I rowed along the shore, I noticed my splits getting faster.  I was coming out of the current into Loagy Bay and into the main stream heading up to the harbor.  But at the same time, it was getting closer to high tide.

As always, I was waked mercilessly as I rounded the breakwater to the inner harbor, and that continued until I was almost to the pier.  As you get into the inner harbor, there are speed limits that make it much better.  This detail map shows a bit more.  I was on the southerly track on the way in and you can see the jogs in the path as I worked my way through the wakes.

I really enjoyed the last bit behind the jetty.  Flat water, tail wind and the end in sight.

For whatever reason, the trip out of the harbor was less eventful.  I swung wide around the breakwater because there was a bunch of traffic.  I got hit by a monumental interference pattern of wakes between two power boats going in opposite directions on either side of me.  I took on a boat full of water, which I drained through the bailer.

One thing about the Aero.  Even when this happened, I felt completely stable.

The row home was enjoyable, but felt a bit heavier than the outbound leg.  The wind was on my port bow.  The headwind and the flat water made it easy to focus on blade work.  It was a bit like bungee rowing.  After I got free of the wake zone, I just started counting strokes and three hundred strokes later, I was just off the beach. 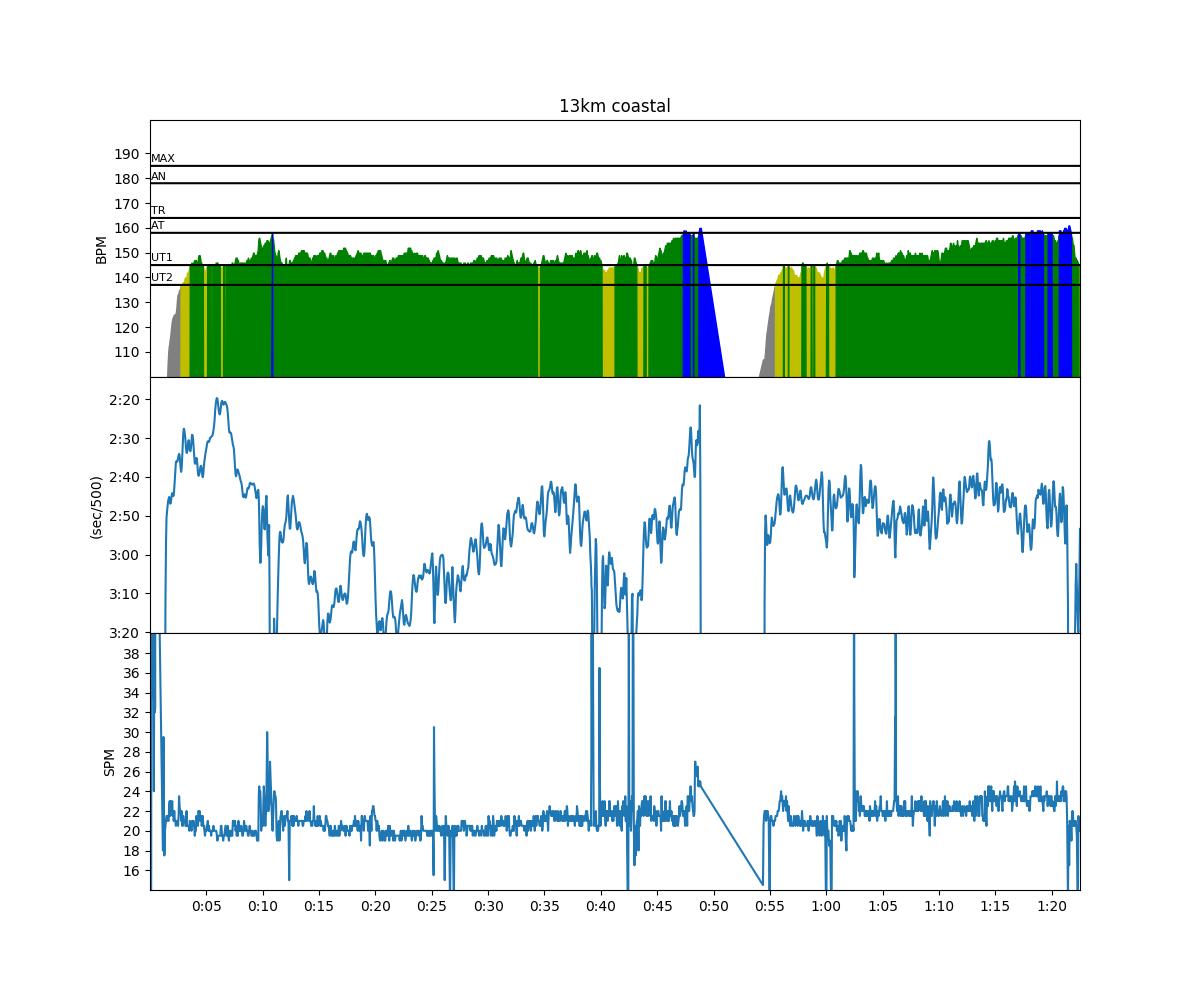 The long break around the 47 minute mark was when I turned around behind the jetty.  I got into a conversation with a couple of guys in motor boat.  One their sons rowed for Penn, and they were asking about the boat and where I row and stuff like that.

Now it’s Monday and a holiday here.  I have some errands and some prep work for the coming week.  I think I will try to do an erg session later today.  Probably something a bit more intense, but I’m not sure I have the motivation to dig really deep.