After I got up this morning and had breakfast, I decided to go for a walk.  It was low tide, which is a blast because the sand flats are exposed and you can see all kinds of marine life.

I headed down the stairs from our deck and headed straight out to the water’s edge.  Then turned south.  My first goal was to walk to the rock that I nearly hit going down to Eastham.

Here it is about an hour after low tide.  It’s hard to get a sense of scale, but the rock is about 8 feet tall and 16 feet long.  It’s a big rock.

I then continued to walk along the edge of the water.  The tide was coming in, so the shore was receding visibly as I walked.  But I had never really walked all along the south edge of the sand flats before and I was eager to explore.  I ultimately decided to try to find my way to the tidal creek that runs under the little bridge to our island.

Along the way I saw some really nice shore birds.  I think the white one was an Egret and the pair was, I think, Willets.

I had a couple of false starts as I went into streams that turned into dead ends in the marsh.  As I got further along, the sand turned to mud and at times I was buried to the middle of my calves, making slow progress.  Ultimately I found the creek and it was about 6 inches deep with a nice sandy bottom.  I was able to rise off all the muck.

As I got close to the bridge, I found a little tidal pool off to the side of the stream and there were 3 horseshoe crabs in it swimming around.

I made it to the bridge and walked back across the causeway, and then out to the Loagy Bay Beach.  I then followed the north shore of the island back around to the house.

Here’s the whole path.  It was just over 6km. 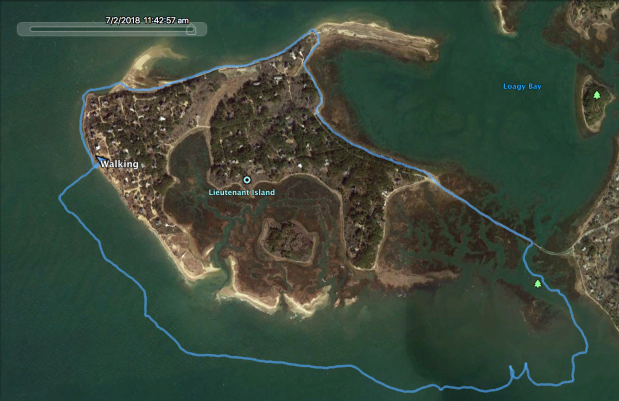 The last bit was really sunny and the southerly breeze was entirely blocked by the island.  It was hot and the sand was soft.  I was pretty sweaty by the time I got home about an hour a twenty minutes after I started.

We chilled out at the house for most of the day, and then around high tide, I decided to go for a row.  I can launch from our stairs at high tide, so I did that and headed south.  The wind was in the process of swinging from the SSE to the SSW as I went.

I followed the shore of the island on my way south to give a wide berth to that damn rock (and also because the marsh is fun to look at).  Once I was well into the bay, I turned and followed the south shore out nd then turned to follow it.

That took about 20 minutes or so.  I decided that I would row south and turn at the 40 minute mark.  With a more direct course and a tail wind, I figured I would end up with a nice 70 minute row.

I watched my heart rate on the way south and tried to keep it around 150 or so.  When I turned, I stopped and drank half a liter of water.  Then I headed home.  The tail wind was pleasant because it lightened up the load.  But I missed the cooling breeze.  The chop was pretty big, maybe 12″ and the boat wakes would interact with it in unpredictable ways.  I experimented with different stroke rates and focused on clean finishes and keeping my blades clear of the wave tops.  It’s a lot more press down than I am used to in my Fluid.  The waves were pushing me around a bit and I had to do a lot of steering to stay on track.  Now the goal was to head directly back to my launch point and not run into the rock.

Mission accomplished.  I spotted the rock off on my starboard bow, about 100m away.  I turned toward the island and back to the stairs.  I stopped a bit offshore, got my feet out of the straps, and undid the nuts on the oarlocks.  It can be a bit hectic with the waves bouncing the boat around at the bottom of the stairs.  I paddled in like that and made a clean landing.  I was just in time.  The rocks around the base of the stairs were almost exposed and would have made landing a lot harder if I had pushed the time much further. 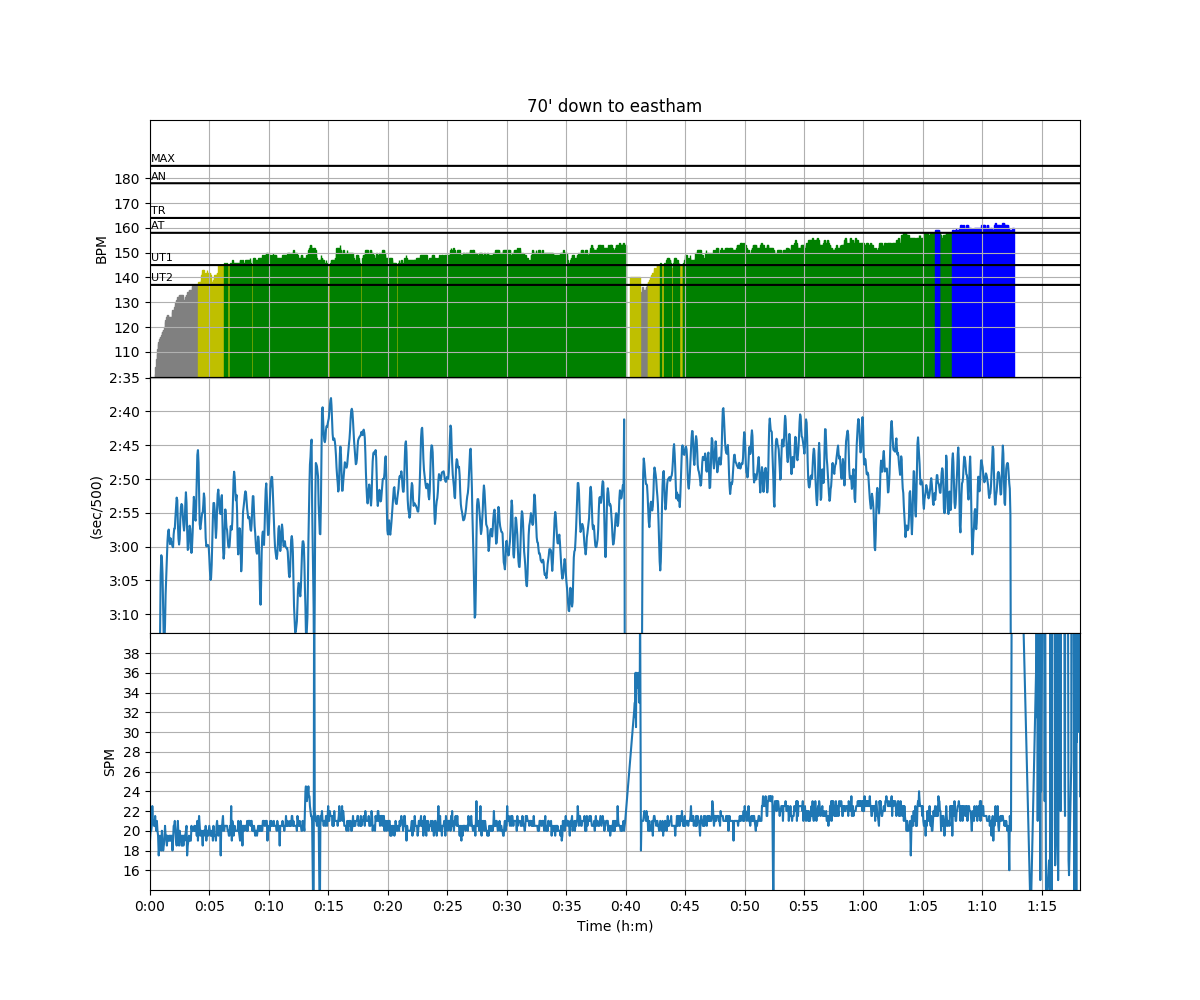 As usual, the hardest work of the outing was carrying the boat back up the stairs.