Wednesday:  I headed into the office at 7am so I could learn my part in the Shinto ritual to dedicate our new building.  It wasn’t that tough to learn.  I needed to take a bamboo branch from the priest and place it on the altar.  But it had to be done “just so”, with the right numbers of and right kind of bowing.  Frankly, I was pretty nervous about messing up.  Were taking this blessing stuff seriously.  Our last building was destroyed by an earthequake, we want to cover all of our bases.

The blessing was at 10, then a lunch reception for the architects and construction company along with the local government officials.  In the afternoon a few internal meetings.

We headed back to the hotel where our big party was to be that evening around 3:30pm, and got there at 4:45.  I didn’t have to be at the reception until 6.  I put on my running shoes and went for a run.

The hotel is located in Kumamoto, right along a river with paths along the banks, so I just started running along the near side of the river.  I crossed to the other side when the path on my side was blocked by construction, then I kept going until I ran out of path.  Then I turned around and headed back.

As always, I intended it to be a gentle jog.  As always, I push the pace too much and my HR gets high, but since I only had about 40 minutes, that was OK.  The Strava data is missing the first 3 minutes because I set up the run wrong and wasting tracking gps, it took me a bit of time to notice it. 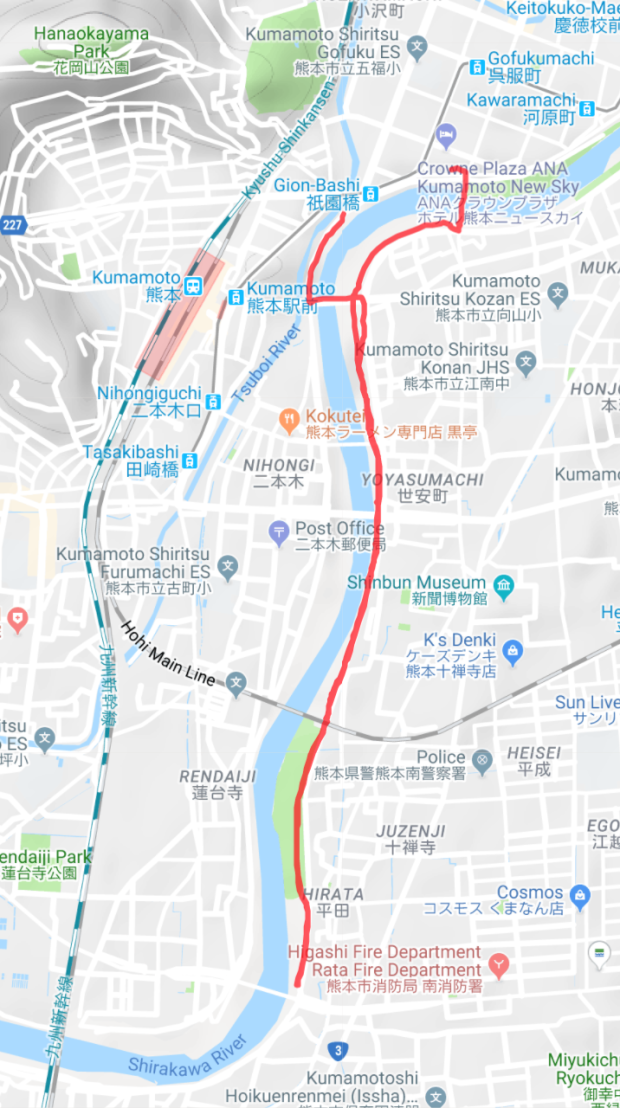 It was humid and I was very sweaty when I finished.  In fact I was still sweating at 6:00 when I showed up at the dinner in my suit and tie.  The dinner was a blast.  The was another first for me, another ceremony for good luck.  This one involves Saki barrels.  The top lid of saki barrel is obviously a circle, a shape that has good positive vibes about it.  So, the ceremony is for a group of people to gather around a Saki barrel and bash in the lid with wooden mallets, then a toast is drunk out of nifty little wooden saki boxes.  To make things more civilized, this is done symbolically.  The saki barrel has just a trace of saki at the bottom, and the lid is conveniently pre-broken.  So the celebrants just need to tap the top and it all crashes in.  There were speeches and dance troupes and plaques and many toasts.  A very nice evening.

Thursday:  Up early for a 7am breakfast meeting with a customer.  After that, a trip into to the office.  A meeting with the full team at 10:30, and then off to the airport at 11:30.  The flight from Kumamoto to Haneda was uneventful, as was the cab ride from Haneda to Narita.  I ended up with about 2 and a half hour wait in Narita.  I headed to the lounge and ate a belated lunch.  I still had a lot of time to kill, so I put my stuff in a locker and went to walk the terminal.

If you haven’t been to Narita, it’s a great airport.  Terminal 2 is huge and it’s good for walking.  I used the gmaps pedometer to measure how far I went…nearly 4 km.  It took me about 45 minutes.  I was a bit sweaty when I finished, but it was time to gather my stuff and head to the gate.  I boarded just a couple minutes later.

I started feeling pretty sleepy as we climbed out, so as soon as the seatbelt light went out, I went to washroom, changed into my pajamas (oh yeah, I brought pajamas!) went back to my seat, and conked out for 7 hours of surprisingly good sleep.

That brings us to the present.  So, I happy.  I thought I would get no exercise at all, but I managed to get a little something done.

Tomorrow:  OTW, 1x, I think I will do a Cat VI endurance session.  Hopefully 80 minutes or so.

2 thoughts on “Better than nothing. A run and a walk”