The hotel had no fitness center, and Komamoto is a really beautiful city with a remarkable castle on a hill, so it was a perfect opportunity for some aerobic sightseeing.

Well, that did not go to plan.  I started off fine, but it was so hot and humid that I was drenched in sweat within minutes.  Then, added to that was the challenges of road closures because of the Earthquake here in April.  The damage to the Castle and the grounds was quite extensive.  There were places where the whole castle wall had just collapsed. 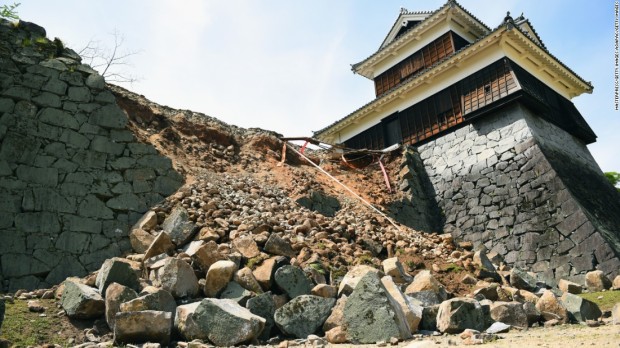 Later in the day, I was speaking to the governor of Kumamoto perfecture, and he told me that reconstruction of the castle and grounds will cost more than $600M, but his government and the national government were committed to restoring it completely.

All of this damage also busted up the roads around the hilltop where the castle sits, so I was shuttled in all sorts of unexpected directions, but the big factor was the heat and humidity.  After about 30 minutes, I found that I could not run any appreciable distance without gasping for air.  A one point during the run, I started to wonder if I was getting a heat stroke, which seems pretty melodramatic.

Anyway, after about 40 minutes, I finally asked Google maps to get me home, which it did.  There was a lot of walking in the second half of this adventure.  It was not the session I intended, but another 70′ of mostly low intensity cross training.

Tomorrow:  I have an early start and tired legs, so I think I will pass on the planned steady state session.