Weather:  Stunningly beautiful.  Clear skies.  mid 70s.  Nearly flat calm when we started.  At the very end, during the row back to the dock, the wind picked up from the North.  By the time we were off the water, it was about 7mph.

There is a big waterskiing competition at the lake today and tomorrow, so we started a half hour earlier to try to avoid the traffic.  I headed north on the lake first and slowly built a bit of pace.  About halfway up the lake someone in a single turned in behind me.  They kept looking over their shoulder and slowly ratcheting up the rate.  I wasn’t sure what they were intending, but but it seemed like he had put a target on me.  Of course, I wanted to stay ahead of them, so I ended up being very warmed up by the time I got to the end of the lake.

I had a drink of water and hung out for a little while, getting myself psyched up for a good hard row.  This would be the first head race simulation of the season and would help set a marker for me to use for training over the next month or so.  It couldn’t have been a better day for it.  The wind and water would be giving me no excuses and the power boats were not out yet in any kind of numbers.

During head racing season, I will be doing these pieces at about 28 spm.  But I need to work my way up to that.  Today, I was looking to hold about 24 spm.  As it turned out, even that was a tough ask.  I was finding myself settling at a 23 and my HR was pretty high.  I think I have to row a bit lighter if I want to get efficient at a higher rate.

The row was entirely uneventful.  I passed three or four singles as I made my way down lake.  I wore a hat with a mirror today and although it wasn’t hugely useful, it wasn’t terribly distracting either.  That is another project for me this summer.  To get used to using a mirror for head races.  I counted strokes.  100 strokes would take me about 900m or so.  So I figured that 600 strokes would take me the 5500m.  I was kind of worried after the first 100 strokes.  I felt pretty tired and I wasn’t sure I’d be able to complete the piece.  Luckily, during the second 100 I had a single in my sights and chased him down.  That was distracting enough that I was able to manage my breathing and ease up just enough to be sustainable.  The third block of 100 strokes took me through the route 9 bridge, and coming out that, I spotted another single, which helped keep me on task as I passed him.  The fourth set of 100 got me just about to the narrows.  I was really feeling it at this point, but the end was getting a lot closer.  I got past the islands, and into the part that always feels incredibly long.  There is a stretch of open water from the last island to the mouth of the south cove.  I hit 500 strokes about at the island, just another 100 to go.   This stretch gave me a good chance to use the mirror to aim at the point at the entrance of the cove.  I have to get used to using this thing when I am tired.  This was my first chance and it worked out.  I nailed the line and passed nice and close to the point

I had 30 strokes to go when I passed and it was time to push a little bit harder to the end.  There wasn’t much to draw on though, I was tapped out.  It felt great to see Crewnerd count up past 5500m, and I coasted to stop.  There was no way that I had another piece like that in me today.  I decided to just do some easy technical rowing to finish out the day.  I had a bit of wait before some of the other folks arrived in the cove, and I was happy enough to just sit in the sun drink my water.  I ultimately paddled up lake to intercept them and came back down lake with them.  I paddled up lake with Bob.  As we came out of the cove, the wind picked up pretty suddenly and made it a bit of a slog to get back to the dock.

If I want to do 2 of these pieces, which I do during this endurance block, then I have to use a more conservative pace target, like 2:20 to 2:25. 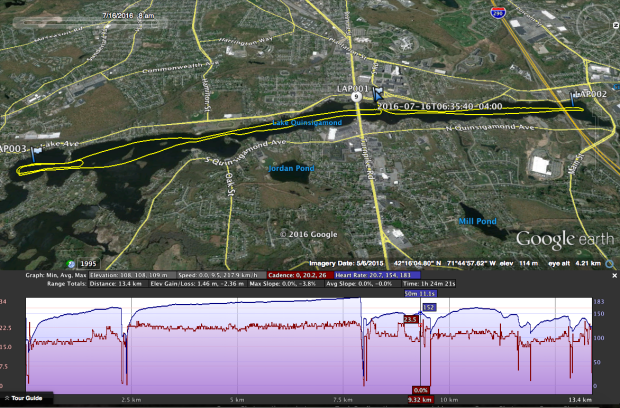 Tomorrow:  Technical session on Quinsig.  Start with some bungee rowing, then 500m blocks of SBR, alternating SBR/feathered and feathered.