Light rain when I arrived, but it cleared and it was sunny by the time I was on the water.  Flat calm at first, but a light wind sprung up from the SSW around rep #4.  This was a head wind for reps 5 and 7 and a tail wind for reps 6 and 8.  The wind was quite variable and it seemed strongest during rep #5, but only around 4 or 5 mph. 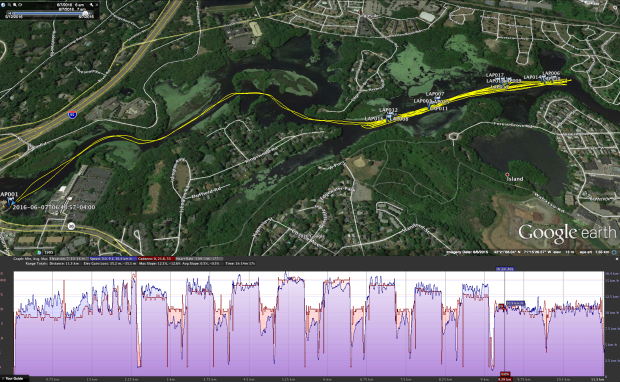 I started with a warm up, just paddling until I went through the cut and past the little island.  Then I did 10 on / 10 off at increasing rates until I was at the end of the straight 1K stretch.

I turned around, set up crewnerd for a 500m/3′ rest interval session.  I really like the increasing stroke rate format.  I don’t think it has as good of a training effect, but varying the stroke makes it easier to face the workout and it does give me a chance to work on technique at head race rates.  Nothing too dramatic happened in any of the intervals.  I was pretty tired by the time I was doing the last 3, but I managed to turn in a good effort on the last one at r24.

After I finished the intervals, I was at the far end of the 1K straight.  I took my feet out of the shoes and rowed back to the dock, trying to clean up my finishes.

Later this afternoon, I am flying out to Phoenix.  I will be running or hitting the fitness center on Wednesday and Thursday.

By the way, since I’ll be getting my boat back this week while I’m away, I thought I should post a picture of the lovely old Peinert I’ve been rowing.