The original intent of today’s training was to do a hard 5K from the south end of the lake to the north end, but this was disrupted by events.  I ended up with a 3.3K interval, and two 1.2K intervals.  It was a lovely morning for a row.  Sunny, mid 50s, very little wind.  The water was flat except for some waterskier wakes.  Even those weren’t too bad today.

I warmed up from the boat house to the south end of the lake, including some 20 and 30 stroke bursts working rate up from 24 to 30.  I also did about 1K on the square and felt pretty solid in the boat.

The I set up for my 5K, and took off. My objectives were:

Keeping pace on target was a bit of an issue.  The battery that decided to be dead today was the new XGPS160.  I hadn’t charged for a couple of weeks, but I’ve only used it on about 6 outings, so I thought I’d be OK.  Turns out, I was wrong.  I will have to plan to keep it plugged into the charge when I’m not using it.  Without the XGPS, I was back to relying upon the iPhone GPS, and on Crewnerd, that means there is a pretty good lag and the pace hunts around a bit.  I ended up pretty much ignoring the pace and rowing by feel.  If I felt like I was about to die, I knew I was rowing hard enough.    Like my 1K intervals, I found that if I stopped concentrating on my finishes, that I would layback too much and slow down.  When I got back on track, and got really good compression at the catch, and finished well, the boat definitely moved much better.  I’ve heard that about rowing with the Fat2s.  You need to work on the front half of the stroke to get any speed.

So, I had run through a couple of wakes without huge slow downs, and I was getting pretty winded by the time I approached the bridge.  A sculler heading in the opposite direction hailed me and told me that they were starting races soon on the 2K course at the north end of the lake.  I pressed on, hoping that I could sneak north outside the race lanes and finish my 5K.  I sped back up, and went under the bridge, and started to turn to the side of the course.  I turned around to look and there were 3 eights steaming down the course towards the finish.  I was safely out of the way, but there was no way I was going to try to finish a hard 5K in the return lane while they were actually running races, so I pulled the plug with a mixture of regret and relief.  It would have been a tough last 2K, but I wanted to finish what I had started.

What to do now?  I decided to do go from the bridge, back south to the end of the lake, and after a bit of a rest I took off on that project.  I had gotten about 750m into that when the other boats I was out with passed me heading north.  I changed my mind and decided to stop at the narrows after about 1200m, and then do another rep going back north.  Maybe it was a rationalization, but I didn’t want them all to wait for me back at the dock if they were done.  That’s considered a bit rude.

I spun just south of the narrows and did my final rep.  I knew it would all be over in 150 strokes, so I pushed this one a bit harder.  While I was doing that rep, the quad passed me going south again.  Oh well, they weren’t going in after all.

I finished the rep at the bridge, turned south again and pulled my feet out of the shoes.  I rowed my cooldown with my feet out.  Another good way to make sure that I concentrated on my finishes.  The quad passed me heading north this time, and I turned to follow them back to the dock.

It was a pretty strenuous workout.  I was happy with the rate.  I was not as happy with the pace.  My pace on the 3K was around 2:17.  I want to be a lot faster than that.  I don’t think it’s fitness, so I need to keep working technique 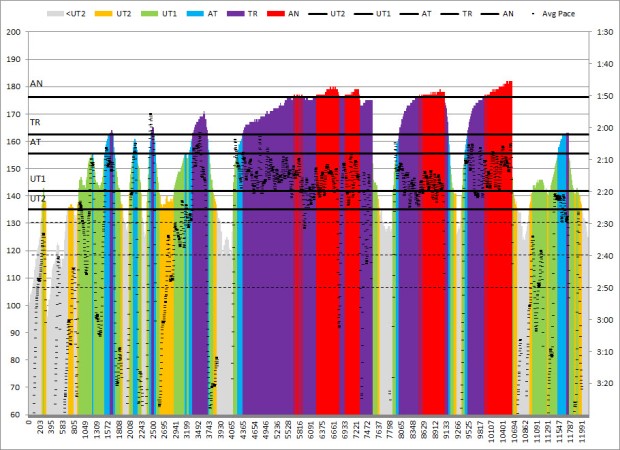