It’s May!  Hopefully the weather will get better, and we’ll be able to row outside soon,  This Friday, my wife packed up and headed down to the cape for the weekend.

We arrived Friday evening, and stopped to pick up a “hands free” pizza on the way.

On Saturday, we lazed around and relaxed.  In the afternoon, I decided to go for a run.  I guess I should put quotes around “run”, since it was notably slow, but really enjoyable,  I clambered down to the beach and ran around the island to north side.  I just made it before the tide washed over the beach at the northwest corner.  Running on sand was quite a challenge.  It’s much softer sand than in Aruba.

After I turned at the northeast corner, I walked a bit, and then I was on harder packed sandy roads.  I ran all the way to bridge on the causeway, then turned and ran down the main road on the island and all the way around to the little beach on the southwest corner.  Then I turned into the wind and did the last slog home back on soft sand again.

It was a moderately hard workout, but not that long.

It was 15 days ago when I took the fall off the ladder.  The scrapes have healed, my elbow is mostly better.  There is still something wrong with my thumb; it really does not like lateral pressure.  My shoulder is OK, but still has limited range of motion.

I was thinking that it would be a good time to see whether the damage that I’ve done would keep me from rowing.

I started off with a pick drill.  20 strokes just arms.  I felt a bit of a twinge from my elbow if I extended it completely.  Well then, we will just use that as a reminder to keep soft arms.  By the end of the 20 strokes, I was able to take them without any pain.  Good.

Then arms and body.  Now I became aware of a new limitation.  If I indulged my bad habit of reaching too far at the catch, my shoulder would remind me not to do that.  A few strokes and I managed to get into a groove that was working.

So, the end result is that my elbow and shoulder are conspiring to make me row better.

After 15 days off, the rest of the 2000m felt like a very long way to row, but I was doing well.  Mostly pain free and maintaining reasonable power. 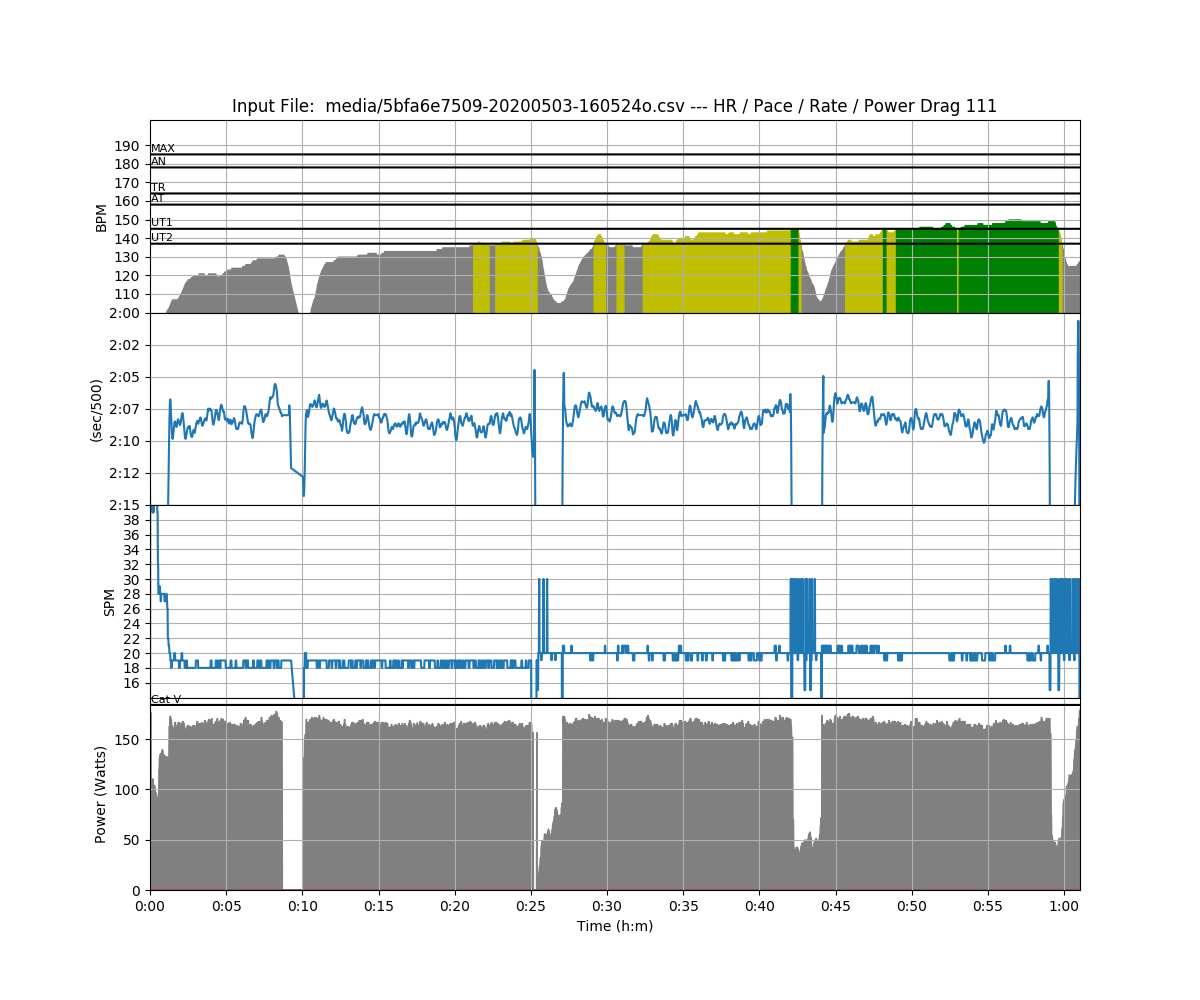 So, what to do now?  I think I will stick to easy stuff on the erg for now and go running a couple of times a week for the more intense sessions.  I don’t want to push it too fast.  Mostly, I want to get stronger for the return of OTW, hopefully in the next couple of weeks.