It was cloudy and misty.  There was a breeze from the NE at 10 mph with gusts to 15.  I had hoped that this would have given me smoother waters, but it was still quite choppy. 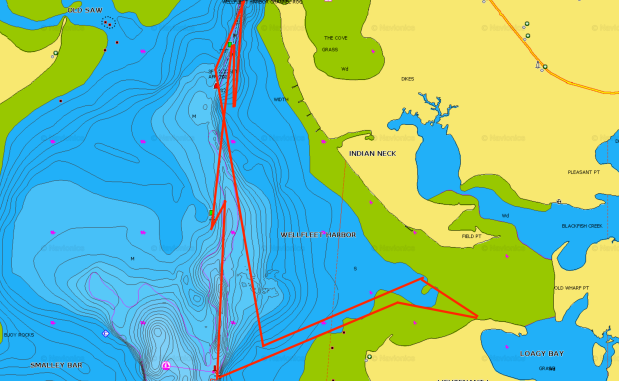 I was electronically challenged.  My Speedcoach GPS died a sad death, a couple of days ago.  The first symptom was it producing impeller data when it wasn’t connected to impeller.  Then it stopped listening to the on/off button.  Finally, when I plugged it in to charge, a strange, random pattern appeared on the screen and flashed ominously.

The diagnosis from NK was “water ingress”, and a replacement is on the way.  (Fantastic customer service!)  But all I had to work with was my iphone in its waterproof case.  I planned to use CrewNerd, which has a good screen lock feature.  It worked perfectly on older models of the iphone which had a real home button.  But on the newer iphone, you really don’t seem to be able fully lock the screen, since swiping up from the bottom is the replacement gesture for pressing the now non-existent home button.  So, anyway, CrewNerd lasted about 4 thousand meters and multiple splashy dousings.  Then I took a big wave over the side of boat and the phone decided to flip over to Safari, then Spotify, then the lock screen.  All of which are pretty useless to get your pace and rate.

I spent a few minutes trying get back to CrewNerd, but getting the phone to unlock with a very wet touch screen was not going very well and I gave up on it.  I did the rest of the workout in the 20th century, with no feedback.  It was somewhat refreshing.

I was doing three minute intervals with one minute rests.  I was doing them at 25 strokes per minute.  So when I rowed into the stone age, I worked off of stroke count.  I did 77 strokes for each interval, and then I would catch my breath and do it again.

If I needed to turn around, the rest would last a little longer.  The intervals going north were really hard work.  The tide was going out, and the wind was right on the bow.  The water got a lot flatter as I got closer to the north end of the harbor, so I went back and forth there a bit.  The intervals going south were easier and more fun.

The last two intervals were quite messy.  I was rowing with the wind and the waves on my beam.  I experimented with rates to try to get in rhythm with the waves, and I worked really hard to get the blades way high on recovery to avoid clipping the waves.

I was rowing as it was approaching low tide, and on the last interval, the water got shallow enough that my oar blades were hitting bottom for about 10 strokes of the interval as I passed over a sand bar.

With all the adventures with electronics, I totally lost count of the number of reps.

My last backup system is my apple watch.  It did nor record gps data, but it captured heart rate.  Looking at the data, I was pleased to see that I had done 15 reps, and they were basically the right length, with appropriate rests.

After I finished and drove home, I realized how tired I was.  This was a pretty epic workout.  I ended up falling asleep at 10:30 and slept until 8:30 this morning.

Today, I am looking to do a nice gentle endurance session.  Either coastal, or erg or bike.  We’ll see how it works out.