Since I was flying out in the evening, I needed to go to town hall and get an absentee ballot for the elections on Tuesday.  Mission accomplished, but no time for training.

I flew to the airport on Monday afternoon.  Arriving in LA around 8pm.

plus 30 minutes on the elliptical (all the treadmills were taken.

Then a busy day of meetings, followed by a real treat.  We went to see the LA Lakers play the Timberwolves.  I got to see LeBron James play basketball live.  It was quite a show.

Got back to the hotel around midnight.

I had hoped to catch up on my sleep, but I didn’t get to bed until about midnight, so only about 5 hours.  Up at 5:15 and off to work. 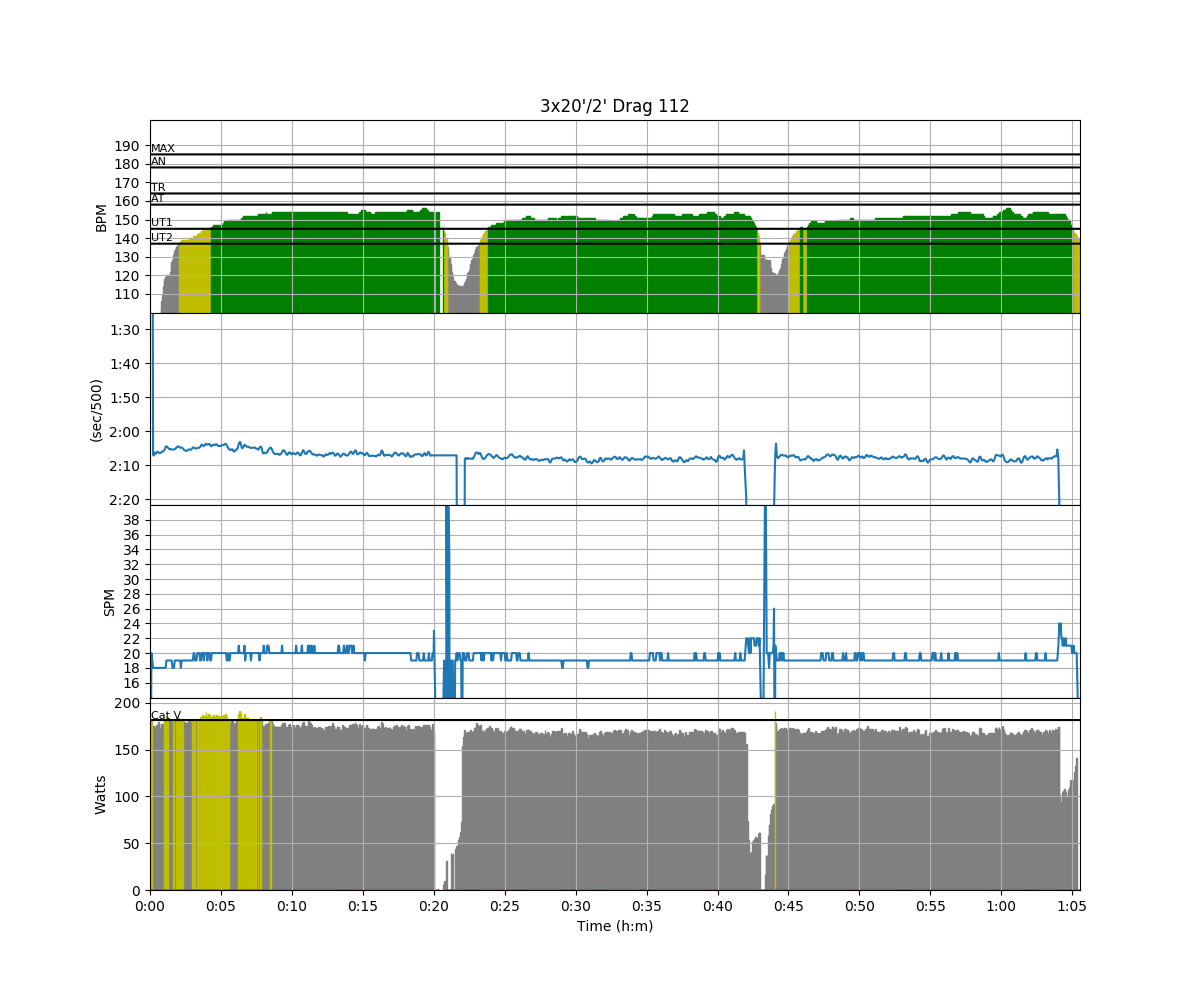 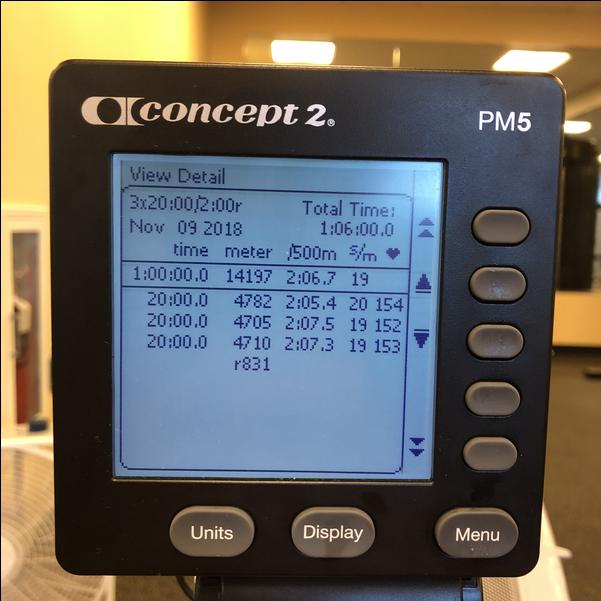 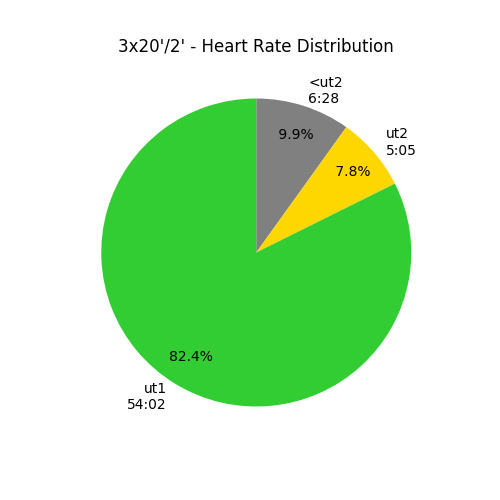 I felt very tired during this piece.  HR was crazy high.  I needed to slow down a lot to keep it under the cap.

By the plan, I should have don a hard distance piece, but I decided that with all the disruption and travel that I’d take it easier and just work on some aerobic base.

I started with my basic core routine:

Then I headed to the basement and did the session on slides.  I wasn’t any faster but it sure felt nice and smooth to be on the slides. 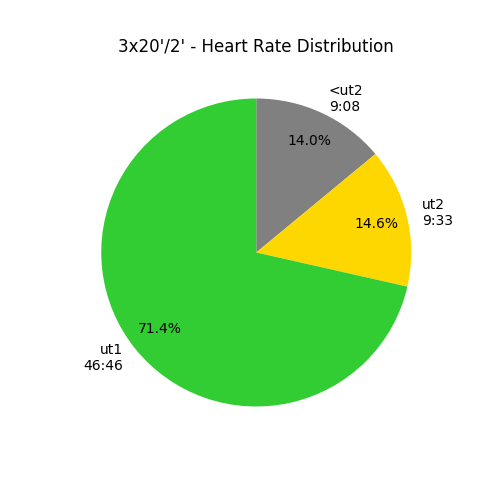 Tomorrow:  Maybe I will do a HM with a bit of tempo to it.

I just got word that the fires in California have come very close to our facility in Agoura Hills.  Like right across the road from it.

Here’s the extent of the fire.  The scale bar at the bottom, is 4 miles long, so the fire is basically 20 miles across.

Our facility in in the yellow rectangle. Here is the zoomed view of the box.  Our building is in the red oval.

I was just there!  I hope everyone stays safe out there.

I met Joe at 8.  We were expecting 5 total rowers, but everyone besides Joe and I cancelled out.  So, we hopped in the double.

I was glad to get out on the water for a bunch of reasons.

The weather was a little iffy.  It was in the low 40s, but there was a brisk wind blowing from the NW.  It was about 10mph on average, but quite gusty, up to 20mph.

When the wind is from the NW, the worcester side of the lake is quite pleasant.  You are in the wind shadow from the shore and you get flat water and gentle tail wind.  But the trip north up the shrewsbury shore is a real slog.  The wind hits the shoreline and is funneled to the south.  There is a pretty good chop and each headland acts as a funnel for the wind and the waves. 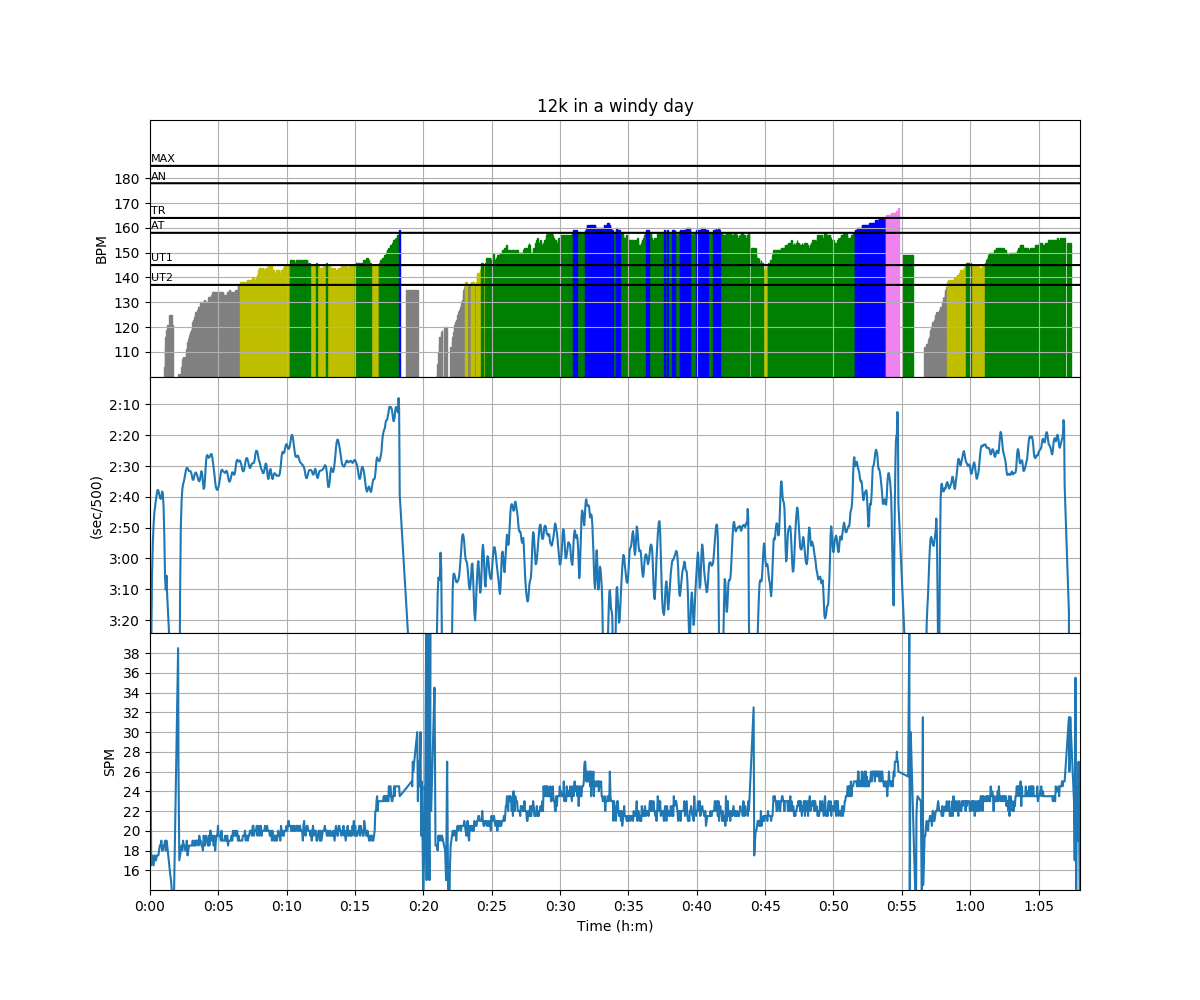 Look at those horribly slow splits!  We were hovering around 3:00 splits for most of the way up the lake.  Each of the big dips was around one of those headlands.

Because I was in the double, I didn’t have my oarlock, but I was curious how much power was required to push into the headwind, so I used one of the advanced features on rowsandall.  There is a physics model to estimate power from pace for a few boat types, including the 2x.  The model includes the ability to correct for wind.  It’s very cool.  It imports the minute by minute wind data from the nearest weather station, and then applies it to the GPS data from your row and figures out whether it was a head wind, cross wind or tail wind and then calculates a corrected pace.  I think today’s breeze might have overwhelmed it.  It says in the toughest bits, we were hitting 300W. 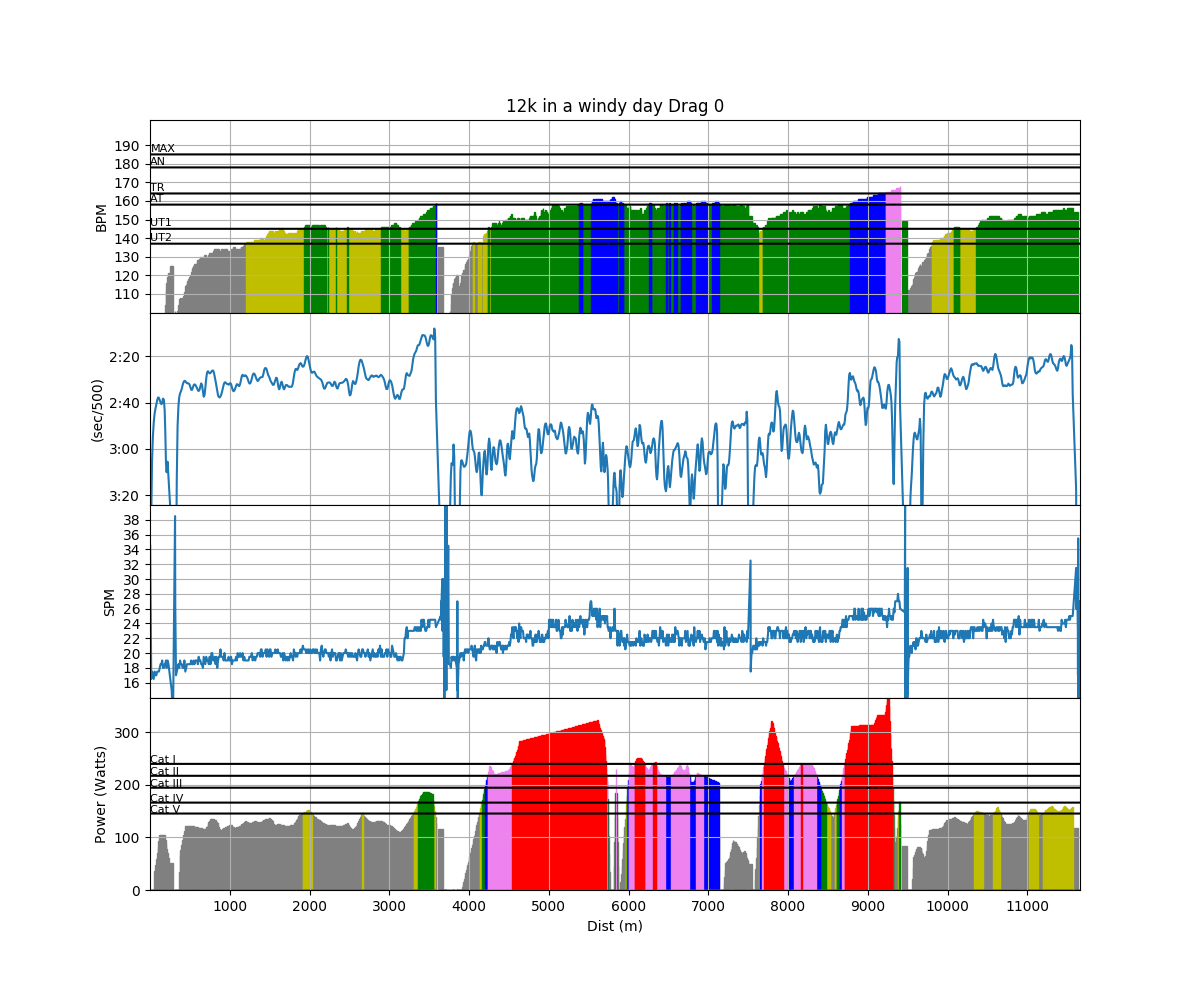 This in turn is used to calculate the corrected pace chart.

I think it might have been a bit generous on the pace estimate, but I sure felt better about the our slow slog into the wind after I looked at it.

The Quiske pod worked great.  When I started I had it mounted wrong way around so it must have thought I was rowing in the Upside Down (little Stranger Things reference for you there).  Once we got to the south end of the lake, I fixed it and was able to see my oar path for about 4K up the lake before my phone ran out of juice.

It’s remarkable how quickly the Quiske folks are improving the iOS app.  It’s already at a state where it can be used to help diagnose and work on elements of technique and they are rapidly working out all the kinks.  I’ll be writing up a more detailed review sometime in the next few weeks.

Tomorrow:  I think it will be basically be a rest day.

The plan calls for a hard distance piece on Saturday, so thats what I did.  Even though I wasn’t relishing the idea of doing it on the dynamic, I figured if I just aimed at 2:00 splits, I’d be fine. 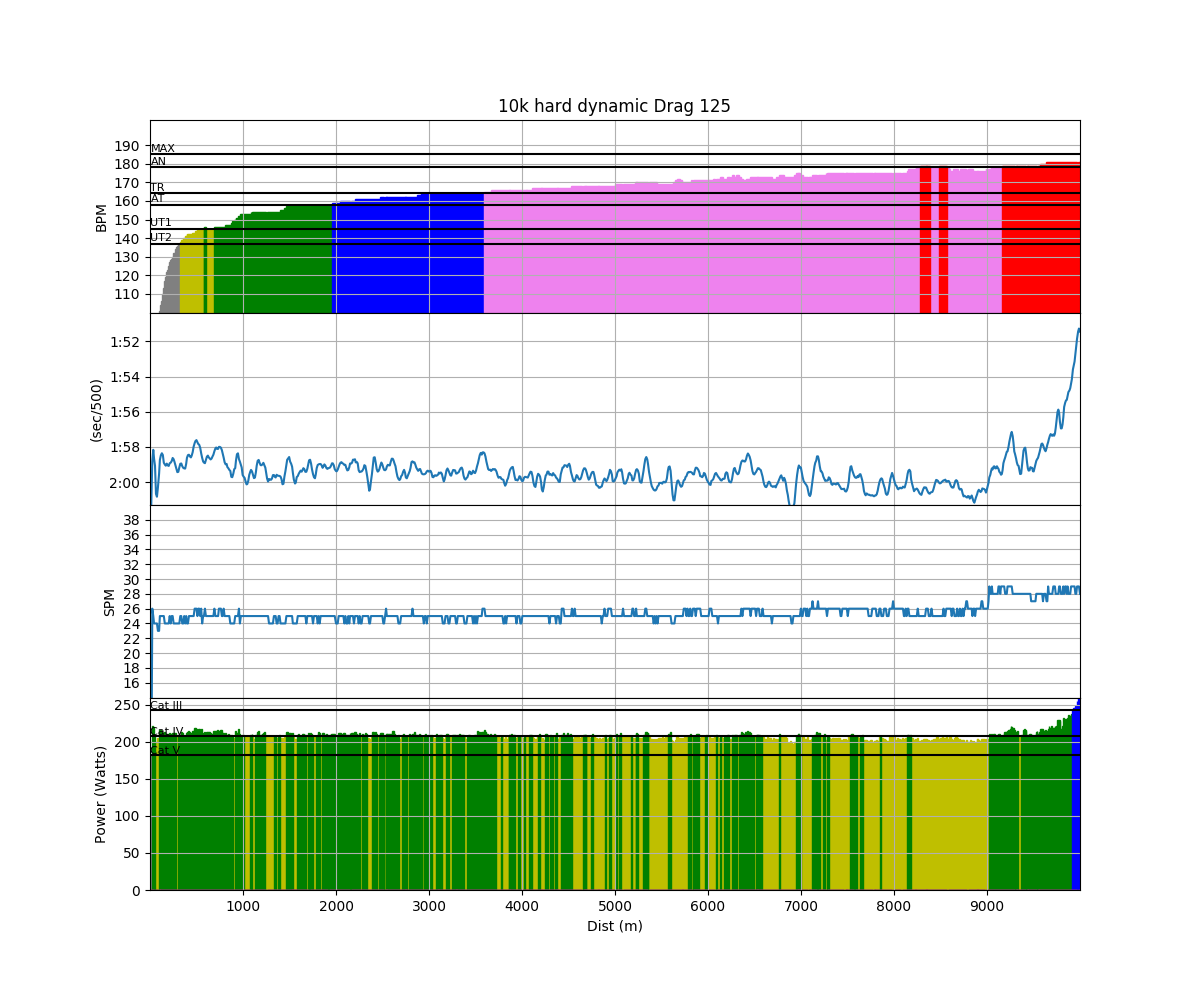 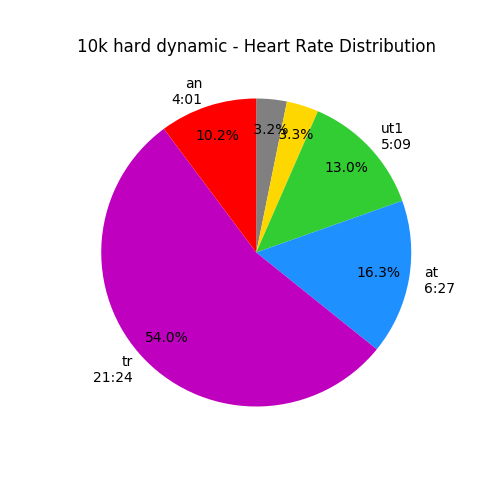 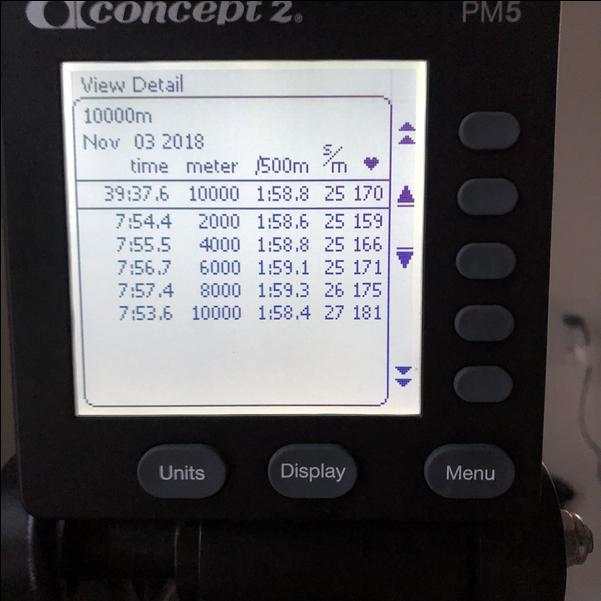 Well, a bit better than the last one.

Here is a comparison of 4 10ks on the dynamic.  I’ve dialed in my best pace and was able to hold it at slightly higher heart rates today.

With the end of the OTW racing season, it’s time to take stock and decide where to go from here.

First, a quick assessment of how this season went.  Basically, it was a pretty up and down experience.  I did much better this year avoiding injury, but I still struggled balance work, life and training.  Here’s what that looks like from a training load perspective.

A few key markers.  Went into July of 2017 in pretty good shape, then between travel and vacation, I lost fitness.  I jumped back in and hurt my back and struggled through the rest of the season, recovering just a little bit by late October, when I had my disappointing HOCR outing.

In November I did fitness testing to get a baseline and started working with Marlene Royle.  Over the next couple of months, things went well and I redid the 20′ and 75′ tests, gaining 15W on the 20′ test and 7W on the 75′ test.

After January 1st, I was plunged into a very heavy period at work and I struggled to train consistently.  This pattern continued all the way to the beginning of OTW season and although I was hoping to do focus on some sprint training and do a 1k event in early July.  But, my work kept me so busy that my training was still a mess.  I was so frustrated with the lack of training time that I cancelled out of the races.

I was so strung out that I contemplated quitting.  But I decided that rowing was something that was keeping me sane, and the competitive part of it was the most motivation thing for me.  But what was the right way to deal with balancing it all out.  I decided that I needed to set my goals on doing one head race.  I was hoping it would be the HOCR, but I’d be OK with any head race.  And I put together a short, simple training plan to work on middle distances.

Luckily, that also coincided with a period of a bit less travel at work, and I managed to get more consistency in my training volume.  I posted these ideas on August 14th.  And from there, things started clicking.  I formalized the plan into a weekly schedule by the end of August.  And from there, I did a pretty good job following the plan.  The following table shows the number of sessions planned of each type and what I actually did.  So over 8 weeks, I missed 2 short interval sessions, 1 long interval session, 1 steady state session (if you count cross training as steady state).  I had 4 extra “rest” days, but in actuality, many of the rest days were actually travel days, which don’t have any training value nor do they have any recovery value.

The result was a steady improvement in fitness through September and October.

I was happy with my performance in the Snake Race, and then did a round of fitness tests.  These tests showed that I was in better shape than last year by a fair margin.

Compared to a year ago.

So, a strong end to a pretty spotty season.

Additional Goal:  My weight is up to 209lbs.  I would like to weigh less than 195 when I get back on the water on April.  I will start tracking weight.

Step 3:  Plan out each block

I’m only going to plan out block 1 right now.  In this block I would like to reduce my erg volume and add in core and strength training.  The rough outline is:

Any of the steady state sessions can be replaced with cross training. 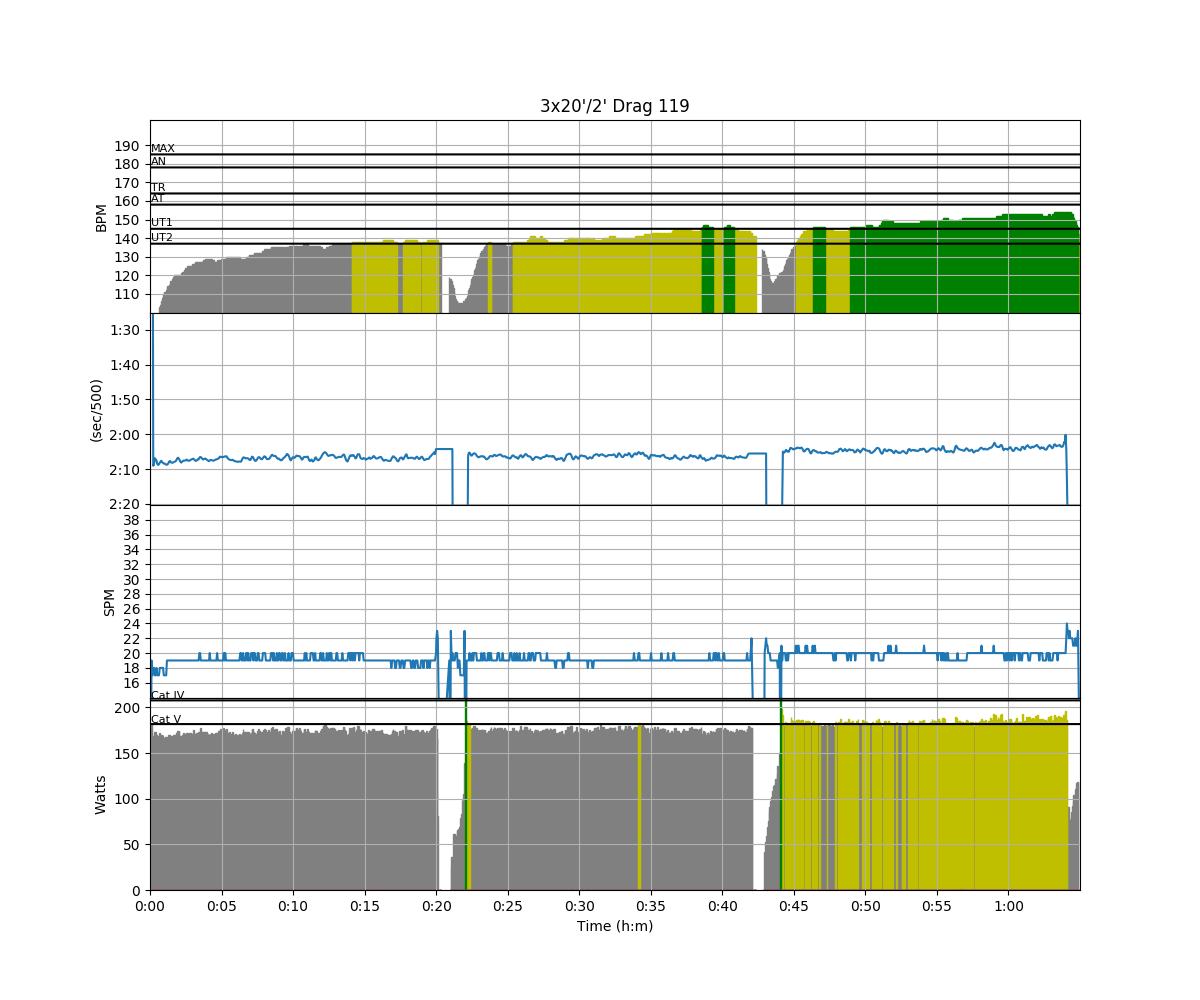 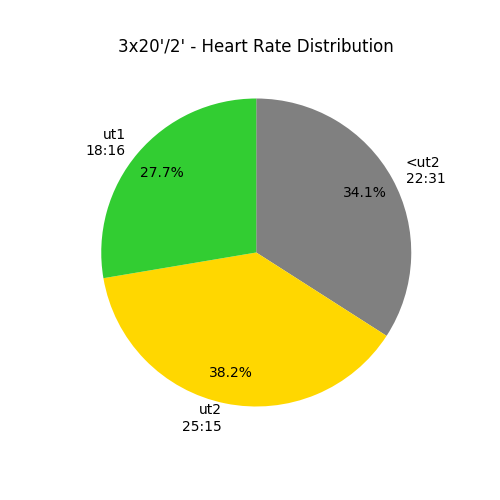 I think I need to pace these a bit more conservatively over the winter to avoid really punishing myself, especially when I am as sore as I was from the weights. 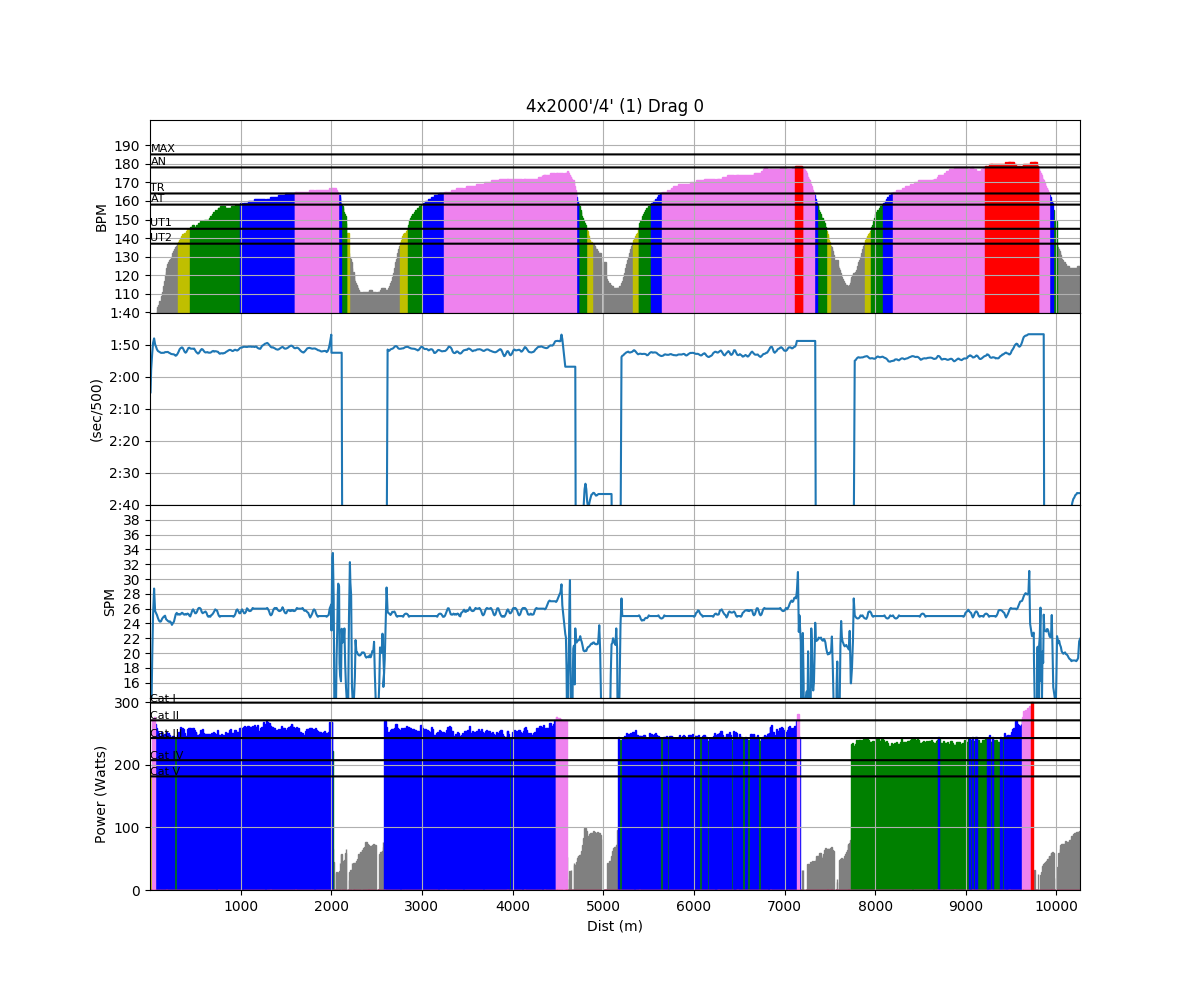 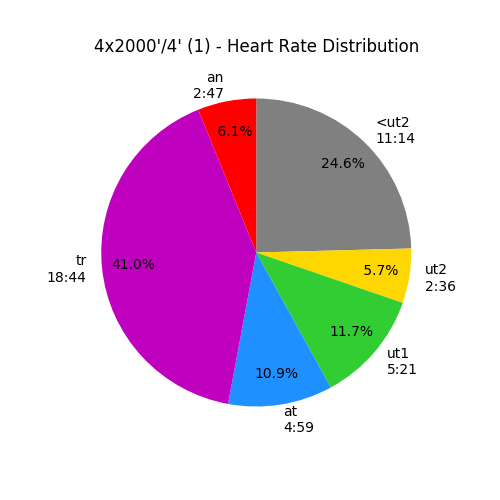 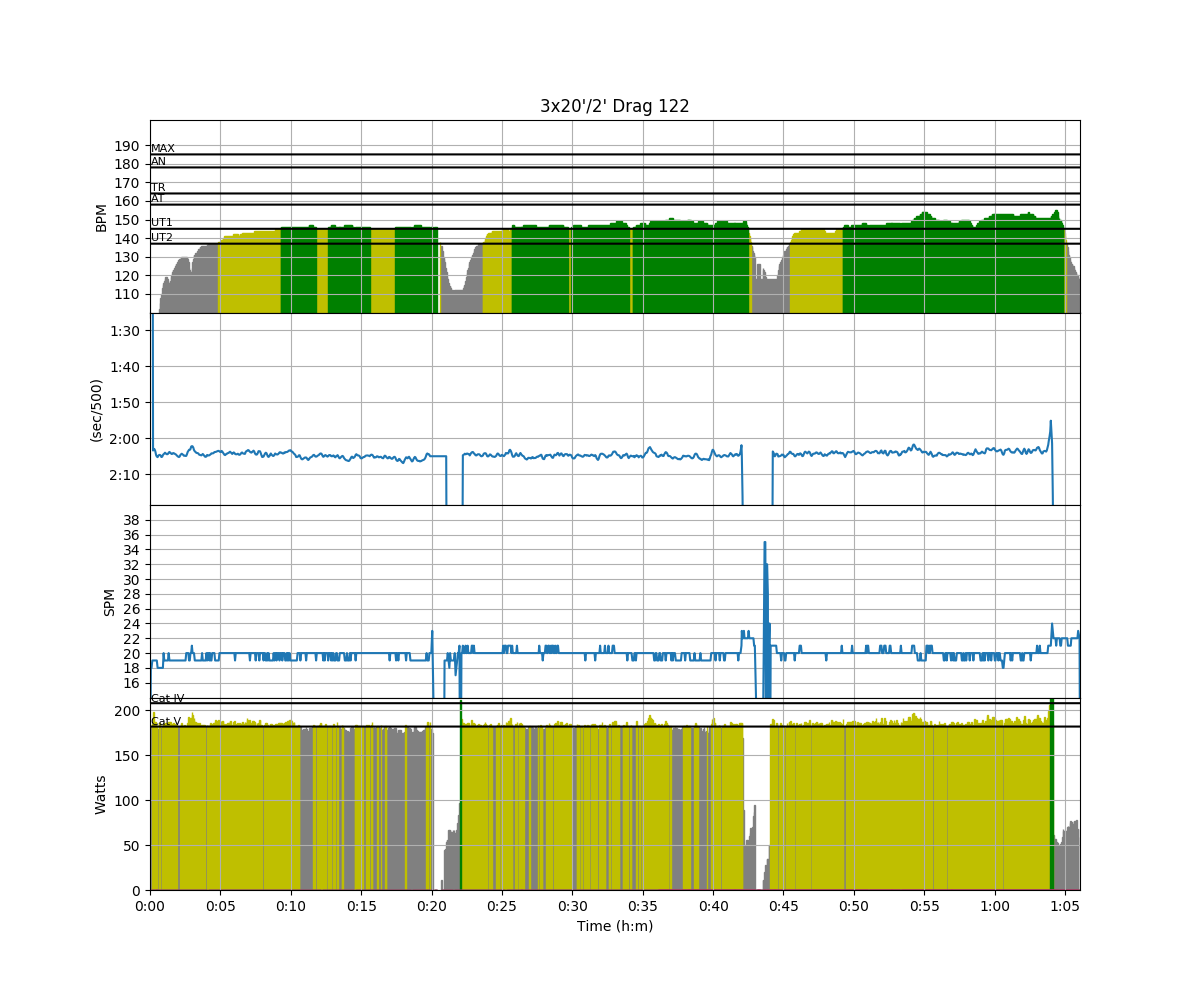 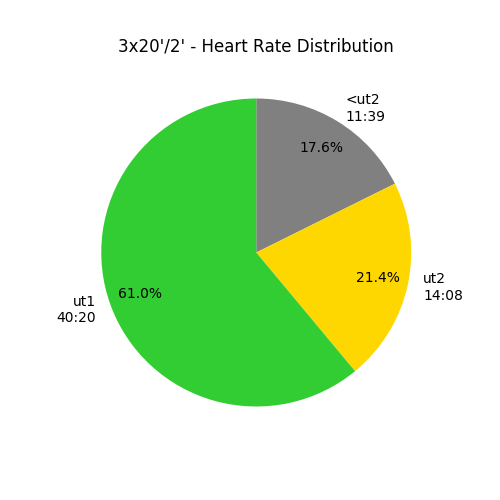 Not bad for a work week. I’ll try to do some hard distance tomorrow, probably a 10K on the dreaded dynamic.