Today was deceptive.  I launched from the base of our stairs.  I came in yesterday at our house and stored the boat on top of the breakwater (not an easy thing to do, by the way).

This morning I had some time to think through my technique.  Basically I do it in steps.  I lift the stern, carry it halfway down the seawall and set it down.  Then I do the same thing for the bow.  Repeat as necessary to get to the beach taking care to not let the boat slide along the rocks.  It’s a bit nerve wracking but a lot easier than cartopping to a long walk to the water.

Anyway, I got myself launched and headed out.  Again it took about 10 strokes of touching sand before I was in deep enough water.  Then I headed east across the bay.  The wind was from the north and as soon as I cam out from  the lee of the island, I got hammered by the waves coming at me from the stern quarter.  They were just over a foot, with some whitecaps. I decided that turning around and heading up to indian neck would probably give me better water.  A good idea.  As soon as I turned around and was heading up into the wind, I filled the cockpit with water.  It also splashed the crewnerd hard enough to turn the damn thing off.  I could still see my splits and rate, but it wasn’t recording any data.  I need to come up with some kind of a splash cover for the phone or just give in and buy a Speedcoach GPS2.

I was right about the water.  I rowed to indian head and the water smoothed out.  There was still a fair amount of wind, but it was entirely rowable, and quite enjoyable.  I rowed up to the north end of the bay, then turned west and rowed along the north shore to the north end of great spit.  Then turned and rowed back all the way to the inner harbor, and around the outside of all the moored boats back to the end of the breakwater.  Then I cut back to indian head and rowed south along the shore all the way to where the salt marshes inland of Lt Island are.  Finally I cut back west and rowed to the north point of the island and around the shore in front of our house.

All together, I’m guessing it was about 16km in about 90 minutes. 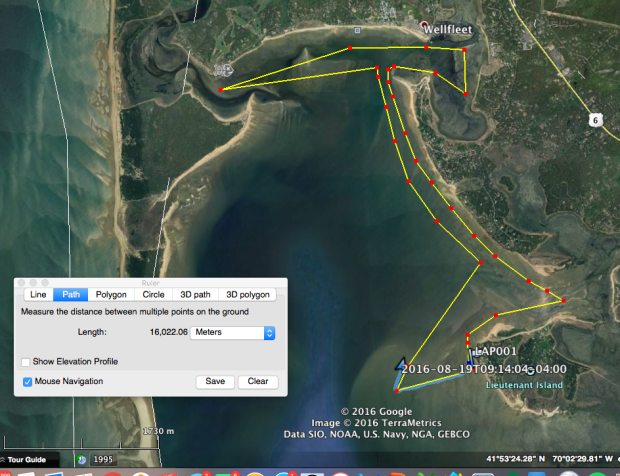 We have some company coming tomorrow, so I am not sure if I will get a row in.  If I do it will probably be a short one.  I’m liking this open water stuff, and I’m getting a hang of rowing this boat.  Basically, I need to rate a little higher and row a little lighter, with a gentler push at the catch, building up the pressure through the stroke.  It also is pointless to pay much attention to the splits because with the wind, waves and tidal currents, it bears only the slightest resemblance to effort going in and the quality of the rowing.  A much better indicator is heart rate.  Today, my HR was generally between 144 and 150.  144 was when I was rowing downwind which is easier but requires a fair amount of concentration.  150 was rowing into the wind, which is technically simpler but a lot more work.

2 thoughts on “Friday: 16K in Wellfleet”