Previously owned by the Marblehead Rowing Club. I was impressed with the club.  They are set up in a corner of a big warehouse type building in a boatyard on Marblehead’s little harbor.

I was shown to the boat which was on the clubs immaculate racks.  There was a group of folks who had just rowed over the Manchester and back (that’s 11 miles round trip!) enjoying some coffee and scones.  The boat looked really nice.  Someone had cleaned it up nicely.  We took it out to the dock and the guy from the club who was selling the boat (and my Dad, who lives in Marblehead) got in a launch to follow me and make sure I didn’t die.

The boat seemed familiar and unfamiliar all at the same time.  It’s a lot wider, so it has a lot more intrinsic stability.  It is only 22′ long, so it has less directional stability.  I was expecting it to feel much heavier to row, but it did not.  In fact it felt quite responsive. 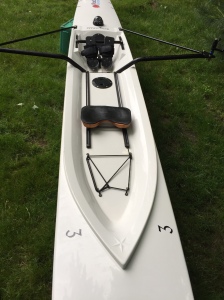 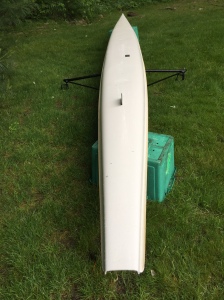 The cockpit is shallow, so that it will not get weighed down with water that inevitably gets into it.  There is an automatic bailer that will pull water out of the cockpit if you are rowing.  It has clogs instead of shoes.  These were very secure and comfortable in use.  On the stern deck is a reverse reading compass.  Even with coastal rowing, it is often very hard to get a point to steer from, and the compass is handy to keep a good line.

The riggers are a simple aluminum tube and can be removed by unscrewing 4 hex screws.  I’ve been warned that the rigger hasn’t been off in years and these screws might be tough to remove.  We’ll see if I ever need to get them off.  The oarlocks are standard issue concept2, set on pins that project up from the rigger, so the oarlocks can rotate 360 degrees around the pin.  There are two access ports.  The one on the seat deck has a gear bag inside it and a tow line in the bag.  The bow one does not.  There is shock cord tie downs to hold a PFD just toward the bow from the rower.

A close inspection of the hull and deck showed no significant scratches.  When held at the ends, there is a bit more flex in this boat than in a carbon fiber single, but I would expect that since there is more weight, the weight is in the middle and it’s fiberglass.  I didn’t notice any flexure when rowing.

I headed out of the harbor and into the confuse chop.  There was about a 1 foot swell, plus wakes from a whole bunch of motorboats buzzing around.  Coming out of the harbor, I was going up into it, and I started to get a feel for adjusting my timing to match the wave frequency.  I was a bit nervous about rowing across the waves, but the motion was not that bad and the boat was very stable when rowed.  I stopped and let the launch catch up with me and we noticed that the light mist had become a reasonably thick fog, so I decided to cut it short and loop back in behind the island.  I pushed up the pace and rate for the last 500 meters or so to see how the boat felt, and to put a bit more stress on the riggers and oarlocks.  The boat felt solid, and the riggers and oarlocks were stiff and smooth.  I was smitten.  Rowing on open water is a different experience.  The waves were quite small and I still managed to ship a fair amount of water in the cockpit from waves breaking over the bow.  I set the foot stretcher by eye and it turned out to be just about right.  I was very comfortable the way it was rigged.

On taking the boat out of the water, we noticed that it had taken on a little water, maybe a cup or so.  I suspect that there is a leak somewhere, perhaps around the bailer, or one of the ports.  I will give it a close inspection and recaulk the most obvious seams.

After I got the boat loaded, the guy selling me the boat gave me a scone and water and started telling me about the club.  They seem to have a lot of fun.  They send a group up to compete in the Blackburn Challenge every year.  This race is on my Rowing Bucket List.  This is a race that circumnavigates Cape Ann.  It is over 20 miles long and usually provides a pretty wild set of conditions.

It starts in gloucester, around the place labeled Babson Ledge.  It then proceeds up the annisquam river to the north mouth of the river, then east along cape ann, then turns south, going past Rockport harbor, and then finally turning back south west for the leg back to gloucester harbor.  If there is a South East wind, there tends to be pretty big swells along the Southwest leg of the race.

Last year it was a bit windy, and the wind was from the North.  When the races were coming out of the north mouth of the river, the tide was ebbing, so there was a wind blowing over the outgoing tide, building some big waves.

Anyway, the guy who sold me the boat invite me up to join them for a practice or two, and to come with them to the race.  It’s July 16 this year, which is a bit too soon for me to feel comfortable, but I think I’m going to plan and train for it for next year.  It would basically be marathon training because it takes between 3.5 and 4.5 depending on conditions.  I think it would be a blast!