The weather was just about perfect.  Not a cloud in the sky.  The temperature started around 50F, and by the time I finished, it was around 60F.  Tee shirt weather!

There was a light, but building breeze from the west.  This averaged around 5mph from the West, which was a head wind heading upstream.

My plan was to do the same workout as Monday.  Rate Ladders.

The length of the river is not precisely right for these ladders, so I just turn around and get going in the other direction.

I am not happy with my boat speed, but I’m not quite sure what’s wrong.  I guess I will just keep working on stroke technique.  Breaking down the stroke into phases:

I think I need to add some drills to try to work on specific parts of the stroke.  The good thing is that the boat is setting reasonably well.

My workout took an unexpected turn on my first trip back up the river.  I was coming through the s-turn and I saw the Brandeis boats lining up to go up river as well.  Before I got to where they were, a pair of fours took off side by side with much splashing and squawking from the cox boxes.  Behind them, two pairs (W2-) were turning around and lining up.  I paddled around to the far side of these boats and then took off when they did.  I wasn’t sure exactly what they were working on, but I decided that my plan was to get ahead of them and stay there.  It turned out it wasn’t that hard to do.  They were rating around a 26, and I was rating between 24 and 26 and opening up some distance with them.  Over about 1100m, I managed to put 100m between us.  Pride compels me to point out that the GPS derived pace over this piece was impacted by both current and head wind.  That felt good.  Then it was back to the regular workout. 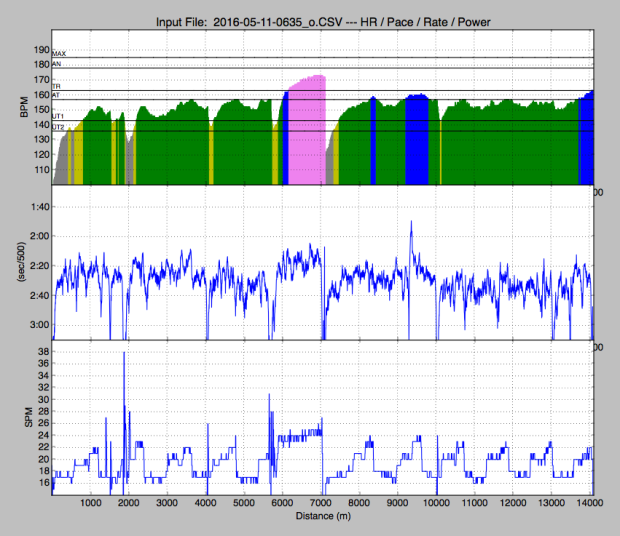 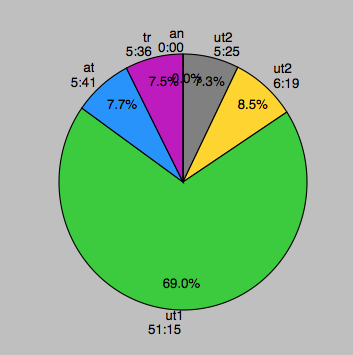