This morning I was at crossfit anaerobic.  A gleaming, large box just four tenths of a mile away from my hotel.  I walked there in about 10 minutes.  I met Kim who took my twenty bucks and pointed me to the ergs.  I was tucked away from the class so I didn’t have the nice visual distraction for most of my workout.  The erg was smooth as silk, and clean enough to give me a drag factor of 200 when set to 10 for the peak power stuff.

I had another customer dinner and another big steak last night.  But I am ashamed to admit, when I got back to the hotel around 10, I felt a little hungry.  Luckily, there was nothing to snack on.  This morning, other than a little dehydration, I felt fine.

The 3×20 was uneventful.  I was listening to “Hamilton” (the musical) and with the rate changes, the time passed quickly and easily.  HR was right around the UT2/UT1 border for the whole row, and continued to drop nicely during the 180W bits, just the way I wanted it to. 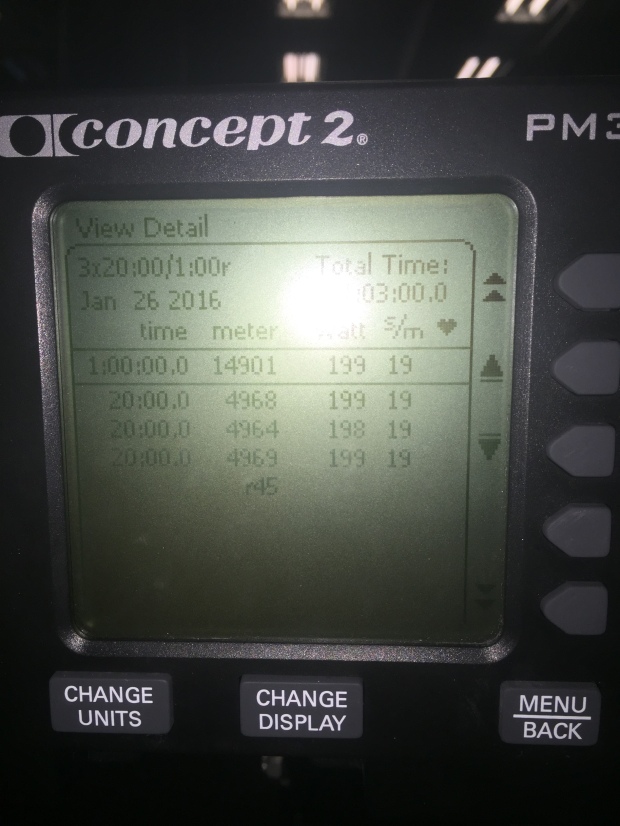 After that, I had a quick drink, toweled off, pushed the damper up to 10 and programmed the erg for 1’10” intervals with no rest.  This is peak power training and the goal was to do a standing start and about 8 hard strokes over 10 seconds.  I was trying to get over 230W on my first pull and over 700W for my peak stroke.  I managed to get over 700W for almost all of the sprints, and topped out around 720W.  I didn’t fade much through the workout.  The first pull was more erratic.  If I hit it just right, I would pull a 235 to 240W first stroke.  But if I overcompressed, or open my back early in the first stroke, I would fall down to 220 or below.

I am enjoying these sessions. I’m worrying that I am doing them wrong since I don’t seem to fade as much as the instructions say I should, but I don’t think I can pull much harder!

Here’s the HR plot for everything, including my walk to the gym.  I like the way the sprints look at the end. 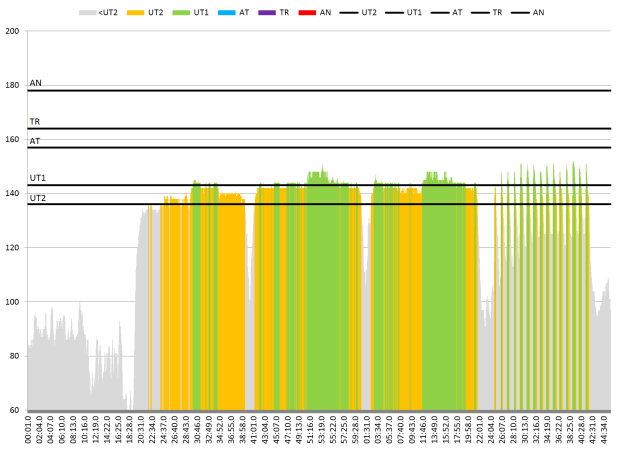