I got to Riverside Boat Club at about 6AM and unloaded my stuff.  Luckily I found a parking spot close to the action.  (I was worried that I wouldn’t)

I checked in and went to the Coxes and Coaches meeting at 6:20.  Then I found a few folks from Lake Quinsigamond and hung out until it was time to launch.  I was in race # 13.  Scheduled for 8:08.  I launched around 7:20 and started to head up river.

I was nervous.  Very jittery.  The boathouse is at the finish, and you have to make your way upriver through the same bridge spans that lane 1 uses coming down river.  So they post referees on each bridge to give you the all clear to go through.  I rowed nearly the whole way up to the start doing drills.  Arms only.  Arms and Body.  Legs Only.  Legs and Body.  Once I was past the Weeks Footbridge, there is enough room to do a proper warmup.  So I started to my ten stroke on / ten stroke off rate ladder.  I found there was too much turning required, so I just did sets of twenty up and down this short section.  After I went through that, I did a few practice starts.  The first was horrible.  After that I calmed down a bit.  Around 8:00, I paddled back down through Weeks and drifted toward the start.

After a bit of backing and forthing they had us set up for the start.  In Lane 1 was a guy from Maine (Hornney).  He pulled a 6:30 erg at last years Crash-Bs, and did well in the Cromwell last year.  I figured he’d beat me by 5 to 10 seconds.  Maybe a boat length or two.  Lane 2 was another guy from Maine (Beretich).  I couldn’t find as much info about him, but I figured I would be competitive with him.  In Lane 3 was another rower from Lake Quinsigamond.  I beat him by a little in last year’s textile regatta, but I’d never matched up with him in a sprint race before.  I thought we’d be side by side as well.

We eventually got aligned and they called the start.  Which was helpfully captured by row2Ks cameras.  I’m in blue. 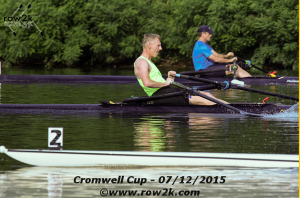 I was slow off the line, but accelerated well and seemed to be even with everyone after about 10 strokes.  I didn’t settle my pace down after 10 strokes because I didn’t want to let these guys get away.  But around the 20th stroke, I did pull my rating down to 30 and focused on  trying to get way out over my feet for the catch.  At stroke 20 was the point to check my steering and I saw that I needed to make a little adjustment away from the center of the river to get lined up with the Boston side arch of the first bridge.  I did that while counting out my next twenty and I was through the bridge.  At this point I looked across the other lanes and I saw that I was about half a length up on lane 3, lane 2 was a couple lengths behind me, and it looked like lane 1 was maybe half a length ahead of me.  I settled into this next set of 20 trying to focus on taking long strokes.  I was a bit distratced between the two bridges because there was a wakeless launch trailing with a photographer, who I swear had the longest telephoto lens ever.  I think this is the result of that.

At the end of this twenty (60 strokes into the race), I checked for my line and discovered that I was drifting over toward the boston bank of the river.  So, I corrected as I went into my next 20 strokes.  This set I tried to focus on legs.  Really staying forward during the leg drive and getting my arms out an body over before I broke my knees on recovery.  I checked my line after 5 strokes and saw I was still off line and corrected more strongly.  This was about the slowest I got in race and I saw the pace drop below 2:00/500.

I remembered what Sander had wrote about focusing on technique and I lightened up a bit and tried to take good smooth strokes the rest of the way through the second bridge.  This happened on schedule around 80 strokes.  Coming out of the bridge, I noticed that I was still only about a length down on lane 1, and a couple lengths up on lane 3.  Lane 2 had not yet emerged from the bridge.  This was highly motivating.  I counted out another 20 strokes, allowing the rate to start creeping up and apparently lane 1 did the same thing because he actually started to pull a bit further ahead.  You can see this at 3:00 of the video, his bow just becomes visible as he puts in a push.  He continues to get further ahead until about 3:25 when I look over again.

It was time to decide.  Either I could just row the rest of the race out and settle for second, or I could try to take this guy.  I decided to give it a go.  I had about 30 strokes left, so I threw everything I had at it.  I started to overtake him and I pushed the rate up even higher, it looked like we were right on line together.  I was rating up at 35 and rowing very sloppily.  I could hear a great “pock” noise at the catch because I was starting to drive to soon, but I just wanted to get more rate and get more strokes in before the end.  I totally ignored the markings of the course and just rowed until I heard the beep.  There were two beeps right together, and neither me or lane 1 really knew who won the race.  I went for a nice cool down row and then came back to the dock.  I wandered over to the finish line officials and asked.  They told me I had come in second by 0.78 seconds.  My final time was 3:53.1.  Although I would have loved to win a medal, I was delighted with the race.  I stuck to my plan.  The course was a blast to row.  The conditions were beautiful.  The race officials were friendly and helpful.  I rowed the fastest 1K I have ever rowed by probably about 6 seconds.  I am already looking forward to coming back next year.    Here are the full Cromwell Cup results. 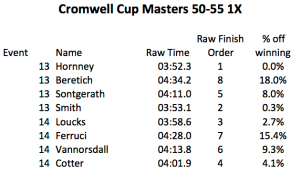 Looking at the results.  I was 0.3% off winning time.  The guy who won the second heat (Loucks) beat me by 7 seconds at the Festival Sprints.  Today, my time was 5.5 seconds faster than his although he was not pushed at all in his race.  So, it’s all good.

Here’s the HR plot for the whole row.  Warm up, Race and cool down. 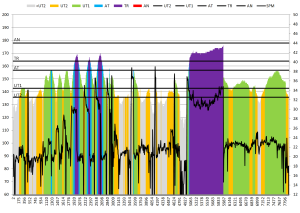 Here is stroke rate and pace from the speedcoach for the race: 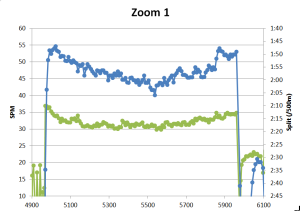 Here is the GPS data showing how I got off line before the first and second bridges.

Finally, here is the video of the race:

Now I am off to Austria on business.  I’ll try to do some cross training and start thinking about a specific Head Race Training plan.